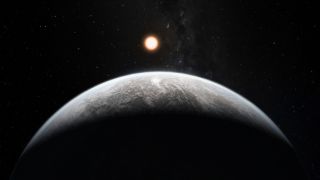 This artist’s impression shows the alien planet HD 85512b orbiting the Sun-like star HD 85512 in the southern constellation of Vela (The Sail). It orbits a star 35 light-years from Earth and weighs the equivalent of 3.6 Earth masses and may be in the habitable zone.
(Image: © ESO/M. Kornmesser )

More than 50 new alien planets — including one so-called super-Earth that could potentially support life — have been discovered by an exoplanet-hunting telescope from the European Southern Observatory (ESO).

The newfound haul of alien planets includes 16 super-Earths, which are potentially rocky worlds that are more massive than our planet. One in particular - called HD 85512 b - has captured astronomers' attention because it orbits at the edge of its star's habitable zone, suggesting conditions could be ripe to support life.

The exoplanet findings came from observations from the High Accuracy Radial velocity Planet Searcher instrument, or HARPS. The HARPS spectrograph is part of ESO's 11.8-foot (3.6-meter) telescope at the La Silla Observatory in Chile.

“The harvest of discoveries from HARPS has exceeded all expectations and includes an exceptionally rich population of super-Earths and Neptune-type planets hosted by stars very similar to our sun," HARPS team leader Michel Mayor of the University of Geneva in Switzerland said in a statement. "And even better — the new results show that the pace of discovery is accelerating." [Illustration and video of alien planet HD 85512 b]

The potentially habitable super-Earth, officially called HD 85512 b, is estimated to be only 3.6 times more massive than Earth, and its parent star is located about 35 light-years away, making it relatively nearby. HD 85512 b was found to orbit at the edge of its star's habitable zone, which is a narrow region in which the distance is just right that liquid water could exist given the right conditions. [Gallery: The Strangest Alien Planets]

"This is the lowest-mass confirmed planet discovered by the radial velocity method that potentially lies in the habitable zone of its star, and the second low-mass planet discovered by HARPS inside the habitable zone,” said exoplanet habitability expert Lisa Kaltenegger, of the Max Planck Institute for Astronomy in Germany and Harvard Smithsonian Center for Astrophysics in Boston.

Further analysis of HD 85512 b and the other newfound exoplanets will be able to determine more about the potential existence of water on the surface. [Infographic: Alien Planet HD 85512 b Holds Possibility of Life]

The HARPS spectrograph is designed to detect tiny radial velocity signals induced by planets as small as Earth if they orbit close to their star. [Related: How do Astronomers Find Alien Planets?]

Astronomers used HARPS to observe 376 sunlike stars. By studying the properties of all the alien planets detected by HARPS so far, researchers found that approximately 40 percent of stars similar to the sun is host to at least one planet that is less massive than the gas giant Saturn.

In other words, approximately 40 percent of sunlike stars have at least one low-mass planet orbiting around it. On the other hand, the majority of alien planets with a mass similar to Neptune appear to be in systems with multiple planets, researchers said.

Astronomers have previously discovered 564 confirmed alien planets, with roughly 1,200 additional candidate worlds under investigation based on data from the Kepler space observatory, according to NASA's Jet Propulsion Laboratory in Pasadena, Calif.

This story was provided by SPACE.com, sister site to LiveScience.com. You can follow SPACE.com staff writer Denise Chow on Twitter @denisechow. SPACE.com senior writer Clara Moskowitz (@ClaraMoskowitz) contributed to this report. Follow SPACE.com for the latest in space science and exploration news on Twitter @Spacedotcomand on Facebook.