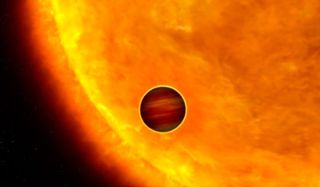 Astronomers use five main tactics to spot planets that are outside our solar system, and the one that has proven most successful and the one used by the Kepler exoplanet-spotting spacecraft is possible using amateur skygazing gear.

Planets orbiting stars located outside our solar system are often called exoplanets or extrasolar planets. They come in various flavors: The extremes include gaseous giants 60 times as massive as Jupiter that whip around their stars in frenzying orbits, and rocky "super-Earths" far more massive than our planet.

While these worlds are too far away to be seen directly, astronomers can look for the effects they have on their suns, other bodies, or even light waves.

The radial velocity method, also known as the Doppler method, analyzes the speed at which a star moves toward or away from Earth as its planet's gravitational pull yanks it back and forth. The astrometry method works similarly, except astronomers gauge the distance that the star wobbles over long periods of time, rather than the star's speed.

Another technique, called the microlensing method, looks for distortions in light resulting from the pull of gravity. The gravitational field of a planet can have a measurable effect on light that passes by it. Similarly, the pulsar timing technique measures whether a star's normally constant stream of radio waves is interrupted by an orbiting planet.

The transit technique takes advantage of the slight dip in starlight that occurs when a planet passes in front of its star. By measuring the decrease in brightness, astronomers can glean valuable information about a transiting planet, including its mass and size. In 2006, astronomers used this technique to discover the exoplanet TrES-2 using three 4-inch (10-centimeter) telescopes they built from a combination of off-the-shelf parts and custom-made lenses.

The transit technique has so far uncovered the most exoplanets. As of Nov. 22, 2010, astronomers had confirmed 502 exoplanets. By comparison, the Kepler Mission spacecraft, which uses the transit method, has detected more than 700 potential exoplanets since it was launched in 2009.