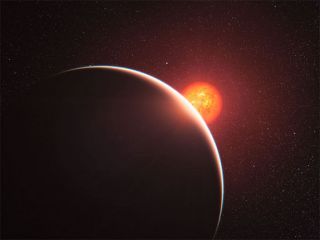 More than 50 new alien planets including one so-called super-Earth that could potentially support life have been discovered by an exoplanet-hunting telescope from the European Southern Observatory (ESO).

The newfound haul of alien planets includes 16 super-Earths, which are potentially rocky worlds that are more massive than our planet. One in particular has captured astronomers' attention because it orbits at the edge of its star's habitable zone, suggesting conditions could be ripe to support life .

But, just what is a super-Earth? [Top 3 Questions People Ask an Astrophysicist (and Answers )]

A super-Earth is a planet with a mass between 1 and 10 times that of Earth. The super-Earth classification refers only to the mass of the planet, and does not imply anything about its surface conditions or habitability.

The first super-Earths, two exoplanets with masses 4 times that of Earth, were found orbiting a pulsar called PSR B1257+12 in 1992. The first super-Earth around a main sequence star one that is on order with our sun was discovered in 2005. With an estimated mass of 7.5 Earth masses, it orbits Gliese 876 and received the designation Gliese 876 d. Dozens more super-Earths have since been discovered, with masses as low as 1.9 Earth masses.

Astronomers have speculated that super-Earths might be more geologically active than our planet, and may experience more vigorous plate tectonics due to thinner plates that are under more stress. Those engaged in the search for alien life get excited about super-Earths because of the possibility that they could be rocky, and possibly habitable, unlike the gas giants.