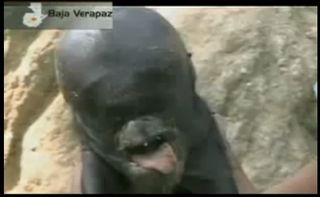 On Sept. 3, a Guatemalan news channel reported the birth of a misshapen pig, which has a face that looks more human than swine. The night before the pig's birth, villagers say they witnessed unexplained bright lights hovering in the sky, and so they attributed the piglet's bizarre features to foul play by aliens.

Members of the local media ran with the UFO theory — are aliens tampering with our livestock, or is this somehow a side effect of radiation from spaceships?

"The whole idea that it could be aliens or a cross-species outcome is ridiculous," Max Rothschild, director of the Center for Integrated Animal Genomics at Iowa State University and coordinator of the USDA National Pig Genome Project, told Life's Little Mysteries. Instead, there is a perfectly ordinary explanation for the creature's humanoid appearance. [Watch video of the humanoid piglet]

One to 2 percent of pigs are born with defects, Rothschild said. They aren't mutants, exactly — there's usually no genetic mutation to blame — instead it's usually more of a mechanical error that arises in the womb, during development. They can result from "something in the feed or just bad luck, such as cells not dividing properly. There's a replicative mechanism and sometimes that just doesn't go right." [The 6 Craziest Animal Experiments]

Rothschild, who has done extensive research on birth defects in pigs, thinks the most likely problem with the piglet in the video is hydrocephalus — the buildup of fluid inside the skull, which causes it to swell. He wasn't startled to see its deformed face, either: "Snout problems are common. I have a two-headed pig in a jar in my office. But it has no genetic basis — it just happens during development," he said.

He pointed out that the offspring of all mammals, including humans, can experience developmental defects during gestation. This can sometimes lead to a silent miscarriage early in the pregnancy. "In pigs where you have multiple births, you could have crowding or some other issue that creates the defect [later on]."