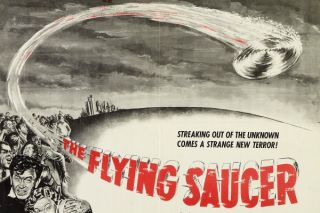 On June 24, 1947, an amateur pilot named Kenneth Arnold was flying a small plane near Mount Rainier in Washington state when he saw something extraordinarily strange. Directly to his left, about 20 to 25 miles north of him and at the same altitude, a chain of nine objects shot across the sky, glinting in the sun as they traveled.

By comparing their size to that of a distant airplane, Arnold gauged the objects to be about 45 to 50 feet wide. They flew between two mountains spaced 50 miles apart in just 1 minute, 42 seconds, he observed, implying an astonishing speed of 1,700 miles per hour, or three times faster than any manned aircraft of the era. However, as if controlled, the flying objects seemed to dip and swerve around obstacles in the terrain.

When the objects faded into the distance, Arnold flew to Yakima, Wash., landed and immediately told the airport staff of the unidentified flying objects he had spotted. The next day, he was interviewed by reporters, and the story spread like wildfire across the nation.

"At that time there was still some thought that Mars or perhaps Venus might have a habitable surface ," Robert Sheaffer, an author of UFO books (and a skeptic), told Life's Little Mysteries. "People thought these UFOs were Martians who had come to keep an eye on us now that we had nuclear weapons."

As time would prove, this was but the first of many outlandish theories behind visits of an extraterrestrial nature. The era of UFO sightings had begun.

Arnold's sighting was "such a sensation that it made front page news across the nation," UFO-logist and author Martin Kottmeyer wrote in an article ("The Saucer Error," REALL News, 1993).

"Soon everyone was looking for these new aircraft which according to the papers were saucer-like in shape," Kottmeyer continued. "Within weeks hundreds of reports of these flying saucers were made across the nation. While people presumably thought they were seeing the same things that Kenneth Arnold saw, there was a major irony that nobody at the time realized. Kenneth Arnold hadn't reported seeing flying saucers."

In fact, Arnold had told the press that the objects had flown erratically, "like a saucer if you skip it across the water." They were thin and flat when viewed on edge, he said, but crescent-shaped when viewed from the top down as they turned. Nonetheless, a reporter named Bill Bequette of the United Press interpreted Arnold's statement to mean that the objects he saw were round discs. According to Benjamin Radford, UFO expert and deputy editor of the Skeptical Inquirer, "It was one of the most significant reporter misquotes in history."

"The phrase 'flying saucers' provided the mold which shaped the UFO myth at its beginning," Kottmeyer wrote. UFOs took the form of flying saucers, he noted, in artist's renderings, hoax photos, sci-fi films, TV shows and even the vast majority of alien abduction and sighting reports for the rest of modern history, up until the present day.

"Bequette's error may not prove to be the ultimate refutation of the extraterrestrial theory for everyone. But it does leave their advocates in one helluva paradox: Why would extraterrestrials redesign their craft to conform to Bequette's mistake?" Kottmeyer wrote. [Read: Could Extraterrestrials Really Invade Earth, and How? ]

Though he didn't see flying saucers, most of Arnold's contemporaries believed that he really had seen something that day. The Army report on the sighting states: "[If] Mr. Arnold could write a report of such a character and did not see the objects he was in the wrong business and should be engaged in writing Buck Rogers fiction." His account was very convincing.

So if he did see something, what was it exactly?

One theory holds that it was a fireball — a meteor breaking up upon entry into the atmosphere. If a meteor hit the atmosphere at a shallow angle to the Earth, its pieces would approach the surface traveling almost horizontally. Furthermore, the pieces of meteor would travel in a chain like the one Arnold saw, would shine very brightly, and would travel at thousands of miles per hour.

But most historians think the objects weren't from outer space at all: "It was probably pelicans flying in formation," Sheaffer said. "Probably Arnold misjudged the distance and thought they were huge objects at a great distance but they were actually much closer."

After all, the boomerang shape that Arnold drew in a picture of the objects he had seen looks very much like a bird with its wings outstretched.