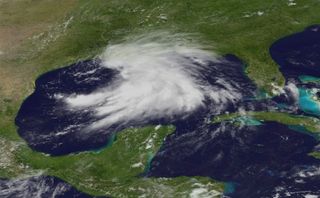 Tropical Storm Lee is now swirling over the Gulf of Mexico, heading toward the drought-stricken states along the Gulf Coast; and although the storm is packing plentiful rain, it looks as though the system will live up to its unlucky former name, Tropical Depression 13.

Forecasters say it appears the storm is going to dump the most rain where it's needed least, and deprive some of the driest regions in its path of any relief from some of the worst droughts on record.

Tropical Storm Lee is projected to drop the heaviest rains on parts of Louisiana surrounding New Orleans — between 10 and 15 inches (25 and 38 centimeters), possibly up to 20 inches (50 cm) in some small pockets.

Southeast Louisiana is in the midst of a drought, though not nearly as severe as those in regions nearby. Two large fires burning outside New Orleans have sent troublesome smoke through the city in recent days, which the rains could help put out.

"So we are welcoming it for that, but this is more rain than we need," said Gavin Phillips a meteorologist at the National Weather Service's New Orleans forecast center.

Louisiana typically receives between 5 inches (13 cm) of rain a month, "so we're talking a few months worth of rainfall, potentially," Phillips told OurAmazingPlanet.

"If we get 10 to 15, up to 20 locally, there will be lots of street flooding," Phillips added. "The pumps in New Orleans can't handle that."

Although the center of the storm is making a beeline for the central Louisiana coast, the lion's share of the rain is on the storm's eastern side. "The heaviest rain is normally on the east side, that's not unusual," said Keith Williams, a hydrologist with the National Weather Service in Mobile, Ala.

Williams said that farther east of New Orleans, in southern Alabama, southern Mississippi, and the Florida Panhandle, forecasters expect Lee will dump about 10 to 12 inches (25 to 30 cm) of rain.

Williams said the tropical storm will bring much-needed relief to a region in the grip of a protracted drought.

"I don't know whether it will get rid of it completely, because it's been severe for quite a long time, but it will take quite a good bite into it," Williams said.

Along the storm's western side, in western Louisiana, moderate rains are expected, and may offer some respite from dry conditions.

"We are in a considerable drought, but it's not the most extreme level," said Donald Jones, a meteorologist with the National Weather Service in Lake Charles, La.

"Any rain is a blessing. I actually haven't heard any complaints from anyone, even though it is a holiday weekend," Jones said.

However, in Texas, where the most devastating droughts in decades have taken a huge economic toll, the coming storm offers little hope of reprieve.

"It's really not going to help for most of Texas," said Matt Moreland, a senior forecaster with the National Weather Service in Houston.

In a strange twist, it appears that Texas may have been better off if the storm hadn't formed at all.

"If it hadn't formed, the moisture would have just spread out and would have come into Texas, but since it formed into a tropical system, it's all concentrated in one area now," Moreland said.

"When a storm forms, you increase the moisture in the storm, but you decrease it all around it, so the storm going to Louisiana is actually dropping our chances for rain," he added.

Moreland said a few scattered showers are forecast for the weekend, but the biggest concern in the region is fire danger; high winds accompanying a storm can create conditions ideal for the spread of wildfires in the region's bone-dry landscape. [Related: Photos: Wild Images of Texas Wildfires]

"I think a lot of people are angry, because before this thing developed, it looked like we might actually get some rain this weekend," Moreland said. "But now that it's developed, unfortunately there are really no prospects for rain on the horizon."