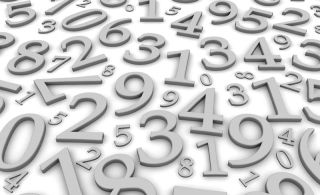 In one experiment, when foreign names were paired with "1" participants rated them as masculine and when paired with "2" they were rated as feminine.
(Image: © skvoor / Shutterstock)

Gender is so fundamental to the way we understand the world that people are prone to assign a sex to even inanimate objects. We all know someone, or perhaps we are that person, who consistently refers to their computer or car with a gender pronoun ("She's been running great these past few weeks!") New research suggests that our tendency to see gender everywhere even applies to abstract ideas such as numbers. Across cultures, people see odd numbers as male and even numbers as female.

Scientists have long known that language can influence how we perceive gender in objects. Some languages consistently refer to certain objects as male or female, and this in turn, influences how speakers of that language think about those objects. Webb Phillips of the Max Planck Institute, Lauren Schmidt of HeadLamp Research, and Lera Boroditsky at Stanford University asked Spanish- and German-speaking bilinguals to rate various objects according to whether they seemed more similar to males or females. They found that people rated each object according to its grammatical gender. For example, Germans see the moon as being more like a man, because the German word for moon is grammatically masculine ("der Mond"). In contrast, Spanish-speakers see the moon as being more like a woman, because in Spanish the word for moon is grammatically feminine ("la Luna").

Aside from language, objects can also become infused with gender based on their appearance, who typically uses them, and whether they seem to possess the type of characteristics usually associated with men or women. David Gal and James Wilkie of Northwestern University studied how people view gender in everyday objects, such as food and furniture. They found that people see food dishes containing meat as more masculine and salads and sour dairy products as more feminine. People see furniture items, such as tables and trash cans, as more feminine when they feature rounded, rather than sharp, edges.

Wilkie partnered with fellow Northwestern psychologist Galen Bodenhausen to demonstrate that this tendency to ascribe gender to objects extends to even highly abstract concepts. They ran an experiment where they asked American participants to rate foreign names (e.g. "Alekseev") in terms of how masculine or feminine they seemed. When a name was paired with the number 1, it was more likely to be rated as masculine. When the same name was paired with the number 2, people were more likely to rate it as feminine. Wilkie and Bodenhausen asked people how they made their decisions, but none of their participants reported that the numbers had influenced their ratings of the names.

In another study, Wilkie and Bodenhausen showed participants photos of babies and asked them to determine for each photo the likelihood that the baby was male. They found that when a baby photo was paired with the number 1, people were much more likely to think the baby was male. Once again, people reported no awareness that the numbers were influencing their perceptions. In a separate study, the researchers had participants rate the masculinity and femininity of the numbers themselves. People readily rated the number 1, as well other odd numbers, as being more masculine. They also rated the number 2, and other even numbers, as appearing more feminine. This last finding was replicated with a sample from India, lending their results cross-cultural support.

Why would odd numbers, across cultures, be associated with masculinity? While more research is needed for a solid answer, it may have something to do with gender stereotypes. Wilkie and Bodenhausen plan to explore this hypothesis in future studies by seeing whether people associate odd numbers with more stereotypically masculine qualities, such as dominance and independence.

Our tendency to assign gender to numbers has a long history. Both the Pythagorean philosophy of ancient Greece and the Chinese philosophy of yin and yang viewed numbers as possessing gender. Both cultures also viewed odd numbers as masculine and even numbers as feminine.

Our tendency to see gender in everything, even numbers, is a reminder of how fundamental gender is to how we perceive the world. When people are led to believe that an object possesses one gender or another, it changes how they relate to that object. For example, Stanford researchers Clifford Nass, Youngme Moon, and Nancy Green had people interact with a computer that was programmed to have either a male-sounding or female-sounding voice. They found that when the computer had a female-sounding voice, people saw the computer as less friendly, credible and knowledgeable, as compared to the male-sounding computer. People did this openly, despite knowing perfectly well that they were making judgments about a machine and not a real person.

It's no surprise that the first thing that most people ask new parents is whether they had a boy or a girl. When we don’t know somebody's gender, it creates confusion in our minds — we have no framework from which to build upon. Gender helps us not only understand how to think about someone, or something, but it also helps us figure out that person or thing's relationship to the rest of the world. Our brains can't help but see gender everywhere we look.

Are you a scientist who specializes in neuroscience, cognitive science, or psychology? And have you read a recent peer-reviewed paper that you would like to write about? Please send suggestions to Mind Matters editor Gareth Cook, a Pulitzer prize-winning journalist at the Boston Globe. He can be reached at garethideas AT gmail.com or Twitter @garethideas.