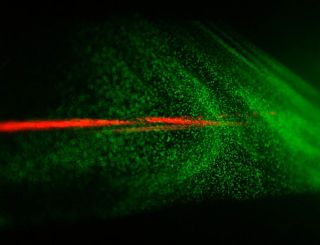 A laser beam (red) and the cloud of generated particles (illuminated by an auxiliary green laser, which makes each particle shine) in a cloud chamber.
(Image: © J.P. Wolf / University of Geneva.)

Lasers could help cause rain, scientists now suggest. The finding may give bone-dry regions of the world much-needed moisture, scientists say.

Rainclouds form when airborne pockets of tiny particles condense water vapor around them. With enough of these cloud seeds, you get clouds and then rain.

A number of techniques have long existed to control rain by seeding the atmosphere with small particles of compounds such as dry ice and silver iodide that raindrops can grow around. However, "weather modification techniques have raised quite a lot of skepticism," said physicist Jérôme Kasparian, at the University of Geneva. [Image Gallery: Curious Clouds]

This controversy is due to questions of the effectiveness of such cloud seeding. The techniques spread chemicals quite widely, so given the variability of the atmosphere, it can be very difficult to judge how they may have actually affected the atmosphere, Kasparian explained.

Instead, Kasparian and his colleagues now reveal control over moisture using lasers. In experiments with infrared lasers over the Rhone River in Geneva employing a variety of temperatures, humidity levels and other atmospheric conditions, the scientists discovered that beams could trigger the growth of micron-sized water droplets even at a relatively low humidity of 70 percent, though not yet droplets large enough for rain.

"At such humidity, condensation does not occur in natural conditions, where 100 percent relative humidity is necessary," Kasparian told LiveScience.

The secret of these beams lies in how they cause chemicals such as nitric acid — which can serve as cloud seeds — to form in the air. These particles prefer to associate with water molecules, acting as a kind of glue that keeps droplets together in relatively dry conditions that would ordinarily cause them to evaporate away. [Mystery Ingredient Influences Cloud Formation]

The fact that researchers can point their lasers at a well-controlled target and at well-defined times allows comparisons to see just how effective the lasers really are at controlling moisture, unlike current weather modification techniques, Kasparian said.

"We are still far from laser-induced rainmaking," Kasparian said. Lasers can generate watery particles and allow them to grow, "but their size is currently limited to a few microns," he said. "They should be 10 to 100 times larger to produce actual rain."

"Provided the above-mentioned challenges are overcome, rainmaking would not need airborne laser systems," Kasparian said. "The type of lasers we are using can reach working distances of several kilometers, so that the atmosphere can be activated using ground-based lasers."

Kasparian sees no advantage in using lasers in conjunction with other cloud-seeding techniques.

"In fact, producing too many particles can even be counter-productive, since these particles would then compete with each other to condense the moisture available in the atmosphere," he said. "As a result of this competition, each droplet would be restricted to small diameters, insufficient to become raindrops, which fall down to the ground."

One concern regarding such weather control is whether or not one area could use lasers to effectively steal moisture that might ordinarily drift to other areas that need it.

"Let me mention that the laser can condense only a small fraction of the moisture from the air, so that the risk that one country takes all the resource from an air mass is not as serious as what happens with surface water, where it is technically possible to pump most of the water from a river before it crosses a border," Kasparian said.

The scientists detailed their findings online Aug. 30 in the journal Nature Communications.