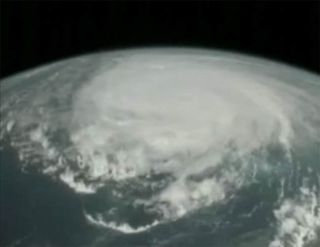 Astronauts on the International Space Station (ISS) got an eyeful of Hurricane Irene's increasing might today (Aug. 25) as their space capsule streaked over the monstrous Category 3 storm, which is barreling toward U.S. shores.

Ahead of the flyover, ISS video cameras revealed placid views of wispy white clouds scattered over the blue of the ocean. Then a huge mass of white appeared on the horizon: Hurricane Irene, a powerful debut storm for the 2011 Atlantic hurricane season.

Even from 220 miles (350 kilometers) above the Earth, the storm's muscle was on full display.

"This is a big storm," said astronaut Mike Fossum during a live video feed from the ISS this afternoon. As the ISS moved closer, a dense swirl of thick clouds filled the frame. [See the video of Irene here.]

"This storm is doing a good job of filling up the Caribbean here," Fossum said, and pointed out what he called the "classic pinwheel structure" of the storm.

It took the ISS roughly six minutes to traverse the breadth of Hurricane Irene, which has organized itself into a colossal storm with a diameter one-third the length of the entire U.S. eastern seaboard.

"We're used to traveling a long way in a short amount of time," Fossum said, "and if this storm is stretching from Cuba to the Carolinas, this storm is one big, scary storm."

Fossum noted that even over North Carolina's outer banks, a region not projected to feel the effects of the storm until Saturday morning, "there's thin stuff that's actually spiraling way out here."

Hurricane Irene is packing winds of 115 mph (170 kph) with higher gusts, and could potentially strengthen in the coming day, according to the latest report from the National Hurricane Center.

The ISS crew has been watching Hurricane Irene's development for several days now.

Although the ISS circles the Earth every 90 minutes — 16 times a day — because it travels at a slight tilt in relation to the equator, the panorama on view below changes with each pass.

During a video interview earlier today with SPACE.com, a sister site to OurAmazingPlanet, Fossum noted that yesterday (Aug. 24) the storm appeared to undergo a pronounced change, and its structure became very uniform.

According to the NASA ground crew, Hurricane Irene has a wind field 300 miles (480 km) wide, and shows no signs of weakening.

"Our prayers and our hopes are with the people who are hunkering down," Fossum said. "Good luck."