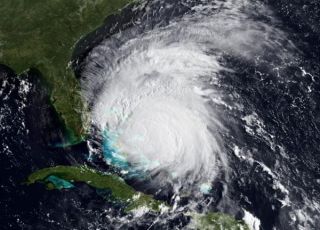 This weekend, Hurricane Irene could bring massive storm surge, fierce winds, torrential rains and flash floods to New York City and other portions of the Mid-Atlantic and Northeast. The scary weather could grind transportation to a halt and force coastal evacuations.

New York's dense, developed coastline makes the city among the most vulnerable to hurricane-related damage, according to the New York City Office of Emergency Management (OEM).

"Due to regional geography, hurricanes in New York City — though infrequent — can do more damage than hurricanes of similar strength in the southern United States," the OEM said in a statement.

Dirty side, clean side

The storm is expected to hit the New York City region by Sunday, though exactly what path it may take remains uncertain. The latest forecasts from the National Hurricane Center put the most likely path as hitting slightly to the west of the city, though it's possible the storm's course could change before then.

Forecasters say it's too early to tell if Irene will be a repeat of the infamous Long Island Express hurricane of 1938, the benchmark by which all New York City hurricane fears are compared. Forecasters will have a better idea once Irene passes North Carolina.

As the storm moves north, the Atlantic's cold water could weaken the storm because cold water is poor fuel for hurricanes.

Irene could still be a Category 1 storm when it reaches the New York region, however. The storm's "dirty side," the right side where the winds are strongest, and blow toward the north, could pack a punch on Long Island.

"It's actually kind of the worst-case scenario for the people of Long Island," said Jeff Weber, an atmospheric scientist at the University Corporation for Atmospheric Research (UCAR) in Boulder, Colo.

If the current forecast holds, New York City should be on the storm's left, or "clean side," which is where the winds are weaker. The likelihood of window-shattering winds is not very high right now, said Adam Sobel, an atmospheric scientist at the Lamont-Doherty Earth Observatory.

A Category 1 storm hitting Long Island would mean tropical storm conditions, or worse, for New York City. [Which US Cities Are Most Vulnerable to Hurricanes?]

"There could be an awful lot of rain, and possibly storm surge," Sobel said.

The U.S. National Oceanic and Atmospheric Administration (NOAA) has forecast 12 inches (30 centimeters) of rain for New York City over the next five days.

"I think we're going to have a serious flooding concern," Weber said, because the wet spring saturated the soil across the region, meaning they won't be able to absorb the influx from Irene. That water would instead build up on the ground, creating prime conditions for flash floods.

As if water from above wasn't bad enough, water could spill forth from the sea. Storm surge, an abnormal rise in water, occurs when strong winds push water forward, ahead of a moving storm. Huge waves form on top of the surge, cresting and pounding the coast.  Storm surge

This could be a problem for Long Island, if those north-blowing winds, and the surge they push in front of them, hit it head-on.

A major hurricane (Category 3 or higher on the Saffir-Simpson scale of hurricane strength) could push more than 30 feet (9 meters) of storm surge into low-lying parts of the city. That's a worst-case scenario; current computer models forecast a small chance of astorm surge of 2 feet (0.6 meters) in the region.

The U.S. Navy has predicted wave heights of around 30 feet (9 m) for the New York region.

"It's sort of a big storm and sort of moving slowly so the wind will be pushing on the water for a longer amount of time," Sobel told OurAmazingPlanet.

Irene's early strengthening could make the surge particularly bad, even after the hurricane weakens. Because Irene has already strengthened to a Category 3, its strong winds have developed a swell of water that it could carry northward.The swell may wane, but it will be higher than if Irene had stayed as a Category 1 throughout its course.

"When they ramp up to a 3 or 4, they kind of keep those swells with them as they move up the coast," Weber said.

This was the case with Hurricane Katrina, which got up to Category 5 strength before hitting the Gulf Coast as a Category 3. Its previous ferocious strength (along with its enormous size) meant it brought a whopping surge with it. Storm surge was about 24 to 28 feet (7 to 8.5 meters) along the Mississippi coast across a swath about 20 miles (32 kilometers) wide, and penetrated several miles inland, tearing up Interstate 10, according to the NHC.

The OEM has set up evacuation zones throughout the city to shelter people who live within 10 blocks of the coast. (Click here to find out if you live in a hurricane evacuation zone.)

People who live in high-rise buildings should be ready to move to the 10th floor or below if winds become strong enough, the OEM says.