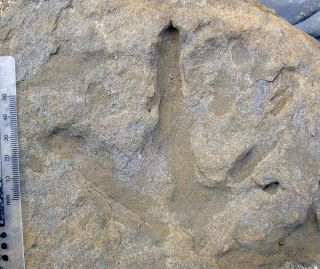 A close up view of one theropod footprint the recent spate of markings found on a beach in Australia, a part of the continent that used to be a part of the South Pole.
(Image: © Anthony Martin)

Several groups of dinosaurs that were roaming the South Pole more than 100 million years ago left three-toed prints in the wet, sandy soil. As they became compacted into cliffs, the prints waited patiently for Anthony Martin of Emory University to stumble across them in what is now Victoria, Australia. He found 24 complete prints.

"This is a big deal, as they represent the greatest number of polar dinosaur tracks found in any one place in the Southern Hemisphere," Martin wrote on his blog, The Great Cretaceous Walk. "It’s enough to make you want to do a happy dance."

The tracks pulled from the sandstone blocks were prints from theropods — bipedal, mostly carnivorous dinosaurs related to modern birds. The tracks indicated that the theropods were of three different sizes, ranging from the size of a chicken to around the size of a crane.

Because of their size and bones found in other sites in Victoria, the researchers are fairly confident they belong to a group of theropods called ornithomimosaurs, also known as "ostrich mimics" because their anatomy is similar to that of modern large flightless birds.

The printed slabs of sandstone were found along the rocky and remote Milanesia Beach in Otways National Park, west of Melbourne. The rough surf pounds the coastal cliffs, frequently fracturing slabs off the cliff face. When the tracks were made, Australia was connected to Antarctia and was located much closer to the South Pole, as a part of the paleogeographic continent of Gondwana. [Photos of the dinosaur tracks]

Martin set off on the trail toward the footprints among the ragged slabs scattering the shore after he noticed ripple marks and trace fossils of insect burrows. "The ripples and burrows indicate a floodplain, which is the most likely area to find polar dinosaur tracks," he explained.

Researchers cannot determine the species of the theropods from the tracks. It's possible they were all of the same species (possibly even a theropod family), or they could have been different species traveling in the same area at roughly the same time.

When the tracks were laid down between 115 million to 105 million years ago, Earth was experiencing global warming, with the average temperature of the area at 68 degrees Fahrenheit (20 degrees Celsius) — about 10 F (6 C) higher than current temperatures there.

This would have dramatically affected the planet's biology and ecology. "These tracks provide us with a direct indicator of how these dinosaurs were interacting with the polar ecosystems during an important time in geological history," Martin said in a statement.

The report of the footprints was published online Aug. 9 in the journal Alcheringa.