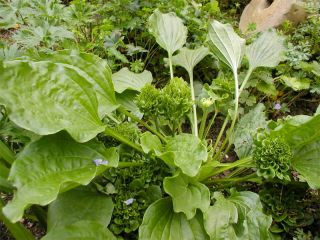 Do you have the summer gardening blues? Has the heat wave turned your cucumbers vines into rope and left your tomatoes as brown as the cracked dirt they're growing in?

Fear not. You likely have weeds in your garden or in your neighborhood that are striving in the heat and are actually far more healthful than almost anything you can grow or buy.

Far from famine food, these so-called weeds can be delicious if prepared properly. And they are absolutely free.

Just a few words of caution: Be sure to identify the weed properly. (The ones described here are easy to spot.) Avoid harvesting from anyplace you suspect pollution — such as from vehicle exhaust, lawn pesticide or doggy business. And remember that edible does not mean allergen-free.

Got your garden gloves? Ok, here we go.

Dandelion is one of the healthiest and most versatile vegetables on the planet. The entire plant is edible. The leaves are like vitamin pills, containing generous amounts of vitamins A, C and K — far more than those garden tomatoes, in fact — along with calcium, iron, manganese, and potassium.

The leaves are most tender, and tastiest, when they are young. This happens in the spring but also all summer along as the plant tries to rebound after being cut or pulled. You can add them to soup in great abundance. Or you can prepare them Italian style by sautéing with a little olive oil, salt, garlic and some hot red pepper.

You can eat the bright, open flower heads in a lightly fried batter. You can also make a simple wine with the flowers by fermenting them with raisins and yeast. If you are slightly adventurous, you can roast the dandelion root, grind it, and brew it like coffee. It's an acquired taste. You might want to have some sugar on hand.

If you've ever lived in the city, you have seen good ol' Portulaca olearacea, or common purslane. The stuff grows in cracks in the sidewalk. Aside from being surprisingly tasty for a crack dweller, purslane tops the list of plants with omega-3 fatty acids, the type of healthy fat found in salmon. [7 Perfect Survival Foods]

If you dislike the bitter taste of dandelion greens, you still might like the lemony taste of purslane. The stems, leaves and flowers are all edible; and they can be eaten raw on salads — as they are prepared worldwide — or lightly sautéed.

You should keep a few things in mind, though, before your harvest. Watch out for spurge, a similar-looking sidewalk-crack dweller. Spurge is much thinner than purslane, and it contains a milky sap, so you can easily differentiate it. Also, your mother might have warned you about eating things off the sidewalk; so instead, look for purslane growing in your garden, or consider transplanting it to your garden from a sidewalk.

Also, note the some folks incorrectly call purslane "pigweed," but that's a different weed — edible but not as tasty.

Lamb's-quarters are like spinach, except they are healthier, tastier and easier to grow. Lamb's-quarters, also called goosefoot, usually need more than a sidewalk crack to grow in, unlike dandelion or purslane. Nevertheless, they can be found throughout the urban landscape, wherever there is a little dirt.

The best part of the lamb's-quarters are the leaves, which are slightly velvety with a fine white powder on their undersides. Discard any dead or diseased leaves, which are usually the older ones on the bottom of the plant. The leaves and younger stems can be quickly boiled or sautéed, and they taste like a cross between spinach and Swiss chard with a slight nutty after-taste.

Maybe that taste combination doesn't appeal to you, but lamb's-quarters are ridiculously healthy. A one-cup serving will give you 10 times the daily-recommended dose of vitamin K; three times the vitamin A; more than enough vitamin C; and half your daily dose of calcium and magnesium.

Plantain, like dandelion, is a healthy, hardy weed as ubiquitous in the city as broken glass. You know what it looks like, but you might not have known the name.

Part of the confusion is that plantain shares its name with something utterly different, the banana-like plantain, whose etymology is a mix of Spanish and native Caribbean. The so-called weed plantain, or Plantago major, was cultivated in pre-Columbus Europe; and indeed Native Americans called it "the white man's footprint," because it seemed to follow European settlers.

Plantain has a nutritional profile similar to dandelion — that is, loaded with iron and other important vitamins and minerals. The leaves are tastiest when small and tender, usually in the spring but whenever new shoots appear after being cut back by a lawnmower. Bigger leaves are edible but bitter and fibrous. [World's Plants Growing Less Thanks to Warming]

The shoots of the broadleaf plantain, when green and tender and no longer than about four inches, can be described as a poor-man's fiddlehead, with a nutty, asparagus-like taste. Pan-fry in olive oil for just a few seconds to bring out this taste. The longer, browner shoots are also tasty prepared the same way, but the inner stem is too fibrous. You'll need to place the shoot in your mouth, clench with your teeth, and quickly pull out the stem. What you're eating are the plantain seeds.

The leaves of the equally ubiquitous narrow-leaf plantain, or Plantago lanceolata, also are edible when young. The shoot is "edible" only with quotation marks. You can eat the seeds should you have the patience to collect hundreds of plants for the handful of seeds you'd harvest. With time being money, it's likely not worth it.

It sounds like a cruel joke, but stinging nettles — should you be able to handle them without getting a painful rash from the tiny, acid-filled needles — are delicious cooked or prepared as a tea.

You may have brushed by these in the woods or even in your garden, not knowing what hit you, having been trained all your life to identify poison ivy and nothing else. The tiny needles fortunately fall off when steamed or boiled. The trick is merely using garden gloves to get the nettles into a bag. [Video – Watch Gorillas Process and Eat Stinging Nettles]

Nettles tastes a little like spinach, only more flavorful and more healthful. They are loaded with essential minerals you won't find together outside a multivitamin bottle, and these include iodine, magnesium, potassium, phosphorous, silica and sulfur. Nettles also have more protein than most plants.

Like all weeds, nettles are free. But you get even more of a bargain if you boil them. You can eat the leaves and then drink the water as tea, with or without sugar, hot or cold. If you are adventurous — or, well, just plain cheap — you can collect entire plants to dry in your basement. The needles will eventually fall off, and you can save the dried leaves for tea all winter long.