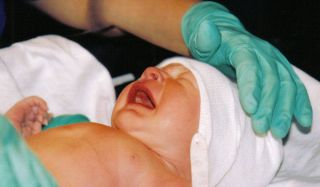 The test of health given to all infants just moments after they're born may also indicate trouble in school for a few of those infants once they become teenagers, a new study shows.

Researchers looked at 877,000 Swedish children and compared their school grades and graduation rates when they were teenagers with their Apgar scores and post-birth health. The Apgar test is a 10-point scale, and much research has shown that it reliably predicts how much medical care a newborn will need.

The researchers found that there is a relationship between having an Apgar score below 7 and having cognitive deficits later in life. They say better understanding the relationship may provide insights into what early problems might cause those deficits.

"It is not the Apgar score in itself that leads to lower cognitive abilities," said study author Dr. Andrea Stuart, an obstetrician at Central Hospital in Helsingborg, Sweden. "It is the reasons leading to a low Apgar score  [including asphyxiation, preterm delivery, maternal drug use, infections] that might have an impact on future brain function."

The study appears in the August issue of the journal Obstetrics & Gynecology.

A moment after birth

Apgar tests are given at 1 and 5 minutes after birth, and they evaluate an infant's heart rate, breathing, muscle tone, skin color and reflex irritability (sneezing or coughing in response to the bulb used to drain mucus from the nose), each on a two-point scale. Scores of 8 and above are considered to be signs of good health.

The Swedish study found that children with Apgar scores below 7 had roughly double the odds of attending a special school because of cognitive deficits or other difficulties.

"Most babies who have Apgar scores of 7 or less do perfectly fine," said Dr. Richard Polin, director of neonatology at Columbia University Medical Center and a member of the American Academy of Pediatrics Committee on Fetus and Newborn.

"It is important that the children born with a low Apgar score are not stigmatized or treated differently than their peers due to the low Apgar score per se," she said, explaining that while tests might indicate how many teens in a large group would be expected to have deficits, the Apgar score would not help predict whether an individual child might have a learning disability.

The Apgar score has been used in the delivery room since it was created — by Dr. Virginia Apgar, in 1952 — to determine if a newborn needs assistance with his or her heart or breathing. Since then, the test has been studied to look at long-term implications.

Earlier studies on children's cognition have had conflicting results, with some showing no connection between the test score and cognitive abilities as a teenager. But this was the largest study thus far, and the researchers wrote in their paper that the study's size may have allowed them to see smaller differences in children who had lower Apgar scores than previous research.

While the study may not change current clinical practice, Polin said, it might prove useful if researchers can better isolate the problems causing the low Apgar score that also cause the later deficits in cognitive ability.

"[The study is] remarkable for its large size and large population database," Polin said. "I think it's an interesting study, but the data needs to be analyzed further."

Pass it on: While some children with low Apgar scores may be at greater risk for cognitive problems later in life, parents shouldn’t worry just because their child has a low score, as most recover fine.