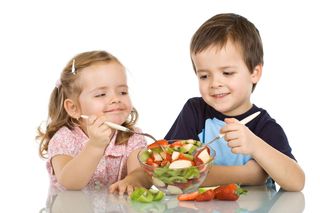 Children who don't get proper nutrition during their first three years may be losing ground in intelligence to their better-nourished peers, a new study suggests.

Eight-year-olds whose diet had been lower in fats, sugars and processed foods by the age of 3 averaged 1 to 2 points higher on IQ tests, even when compared with children who switched to a healthier diet after age 3.

"Children should be encouraged to eat healthy foods from an early age, and to avoid foods that are high in fat and sugar, as far as possible," said study researcher Kate Northstone, a research fellow at the School of Social and Community Medicine at the University of Bristol in England. "We know this is important for physical growth and development, but it may also be important for mental ability."

"This study shows that early diet, beyond breastfeeding, may be important — and more important than later diet — in optimizing cognitive development," Northstone said.

Given the preliminary nature of the study results and the relatively small effect they found, she urged caution in interpreting them.

Like most studies looking at early nutrition and long-term outcomes, this study suggests a relationship but not a cause and effect, said Dr. Steven Abrams, a member of the American Academy of Pediatrics' committee on nutrition, who was not involved in the study.

But at the same time, Abrams said, given the complexity of looking at diets based on parent surveys and following them over time, a statistically significant result deserved some credit.

"It's always a challenge to find something," said Abrams, a professor of pediatrics at the Baylor College of Medicine.

The results showed that certain subgroups of kids may benefit from an improved diet, and identifying them may help in targeting babies for early nutritional intervention, Abrams told MyHealthNewsDaily.

But he didn't expect the results to be a tipping point for anyone to change their child's diet.

"Most people think a healthy diet is good for you anyway," so it isn't likely that parents would change their children's diet to make a 1- or 2-point difference in IQ, he said.

Still, "evidence is developing that healthy diets for small children, actually have meaning long-term, even though science is never going to precisely find the benefit," Abrams said.

The researchers looked at just under 4,000 8-year-olds whose diets had been examined as they had grown up.

It is unclear what components of their diet would impact IQ. Abrams said it may be that extra omega-3 fatty acids and iron helped the developing brains of the children to grow.

The researchers said parents could take some guidance from their findings even without being able to quantify an exact mental benefit.

"The effects of diet on IQ were relatively small, but this study adds to the evidence regarding the avoidance of processed foods and the promotion of nutrient-rich, healthy foods," Northstone said. "We would recommend that parents try to reduce the amount of foods containing high levels of fat and sugar and processed foods in their child's diet, favoring foods that are nutrient-dense, such as fruit and vegetables."

Pass it on:Researchers found a slight benefit in IQ for children on a healthier diet during their first three years of life. While the benefit was small, there are other good reasons for making sure kids eat healthy early on.