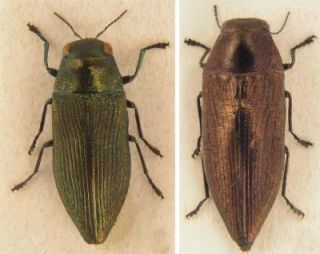 "All new species belong to the genus Philanthaxia," said Oto Nakládal, author of a study on the discoveries. "Before the publication of this study, 61 species had been known from this genus. Currently it comprises of 65 species, with a primarily Southeast Asian distribution, except for two species extending to the Australasian region."

The new members of the Buprestidae family, known as jewel beetles for their gleaming colors, include Philanthaxia pseudoaenea, which was found in Thailand.

The scientists, from the Czech University of Life Sciences, also discovered a male specimen of the Philanthaxia iris. The species had originally been described only on the basis of a single female beetle from the Indonesian island of Java, but the researchers were able to obtain a male specimen from a local collector, also in Java.

The newly found Philanthaxia jakli, Philanthaxia chalcogenioides and Philanthaxia lombokana beetles are distributed among Sumatra, Borneo and Lombok in Indonesia. The biology and host plants of these new species remain unknown, since the specimens were obtained from the islands' locals.