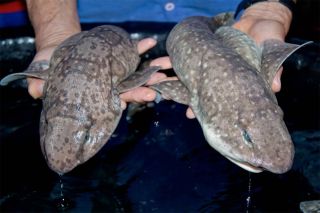 These swell sharks can make like giants by inflating their bellies with water.
(Image: © Stephanie Stone, California Academy of Sciences.)

A treasure trove of hundreds of new species may have been discovered in the Philippines, including a bizarre sea star that feeds exclusively on sunken driftwood and a deep-sea, shrimp-eating shark that swells up to scare off other predators.

Scientists braved leeches and a host of venomous creatures from the mountains to the sea to uncover more than 300 species that are likely new to science. These findings include dozens of new insects and spiders, more than 50 colorful new sea slugs and a number of deep-sea armored corals "which protect themselves against predatory nibbles from fish by growing large, spiky plates," said researcher Terrence Gosliner, dean of science and research collections at the California Academy of Sciences and leader of the 2011 Philippine Biodiversity Expedition.

Working in the field is always a challenge, Gosliner noted. "We had our work both on the coral reefs and rain forest interrupted by an early typhoon; we were out of the water for two days," he said.

"One of the biologists working in the mountains was sleeping in a hammock; during the night, one of the trees his hammock was tied to was uprooted and he was suddenly on the ground," Gosliner added. "One researcher knelt on a venomous lionfish and later found himself on a mountain kneeling on poisonous plants."

The hard-won result of their efforts was the most comprehensive scientific survey effort ever conducted in the Philippines.

"I have been working in the Philippines on my own research for 20 years — I thought it would be great to bring a large team of researchers together to study from mountaintops to the deep sea, to determine if all of these places harbor new species," Gosliner said. "I was delighted that my hunch proved to be correct."

Their novel discoveries include a cicada that makes a distinctive "laughing" call, a crab whose pincers are lined with needlelike teeth, and a wormlike pipefish that hides among colonies of soft coral. In addition, they discovered a possible new species of swell shark — a shark that pumps water into its stomach to puff up — which unlike its relatives possesses a very distinctive camouflaged color pattern.

A number of species live in places rarely, if ever, visited by people, such as a primitive plant called a spikemoss from the perilously steep upper slopes of Mount Isarog and a snake eel from the bottom of the ocean. Many others have avoided detection in the past because of their diminutive size, such as goblin spiders and barnacles that all measure just a few millimeters long.

"One of the likely new urchins is very small — it's called a pea urchin, and yes, it's about the size of a pea," Gosliner said.

All these new findings help support the idea that the Philippines "is one of the hottest of the hotspots for diverse and threatened life on Earth," Gosliner said. "We found new species during nearly every dive and hike as we surveyed the country's reefs, rainforests and the ocean floor." [10 Species You Can Kiss Goodbye]

In fact, the researchers suggest the waters of the Philippines may house more species than any other marine environment on Earth. The deep-water channel they sampled is nutrient-rich, allowing life to flourish, and has existed for about 60 million years, giving species a great deal of time to evolve. "All of those factors together have led to the high diversity," Gosliner told LiveScience.

The researchers are sharing their results with Filipino agencies and international groups to develop strategies to best protect the island nation's extraordinarily rich life. This includes outlining the most important places for establishing or expanding marine protected areas, suggested locations for reforestation and reduction of plastic waste.

"We are hoping the findings will result in recommendations that will translate into policies that will produce a more sustainable future for Filipinos while simultaneously protecting the unique biodiversity," Gosliner said.

"This expedition has led us to want to undertake more expeditions to the Philippines in other unexplored areas," he added.

The scientists will present their preliminary results on June 30, during the California Academy of Sciences' weekly NightLife event.