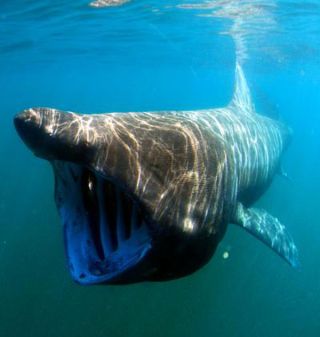 Basking sharks, one of the largest fish on Earth, are notoriously hard to find, despite their colossal size and unmistakable silhouette. Now, scientists working in California have called on satellite technology to help them track these mysterious and scarce sharks.

In early June, researchers with the National Ocean and Atmospheric Administration's (NOAA) Fisheries Service affixed a tracking tag to a basking shark swimming about 5 miles (8 kilometers) off the San Diego coast. Despite the fact that satellite tags are now widely used to study marine animals, it is only the third time a basking shark has been tagged in the entire Pacific Ocean.

"Reasonable numbers haven't been seen off California since the late '80s and early '90s," said NOAA's Heidi Dewar, in an email. "So until recently it would have been hard to even get access to them to tag."

In fact, Dewar said, the species had become so elusive in the eastern Pacific that it fell off scientists' radar as part of the local fauna. Worldwide, very little is known about the life cycle of the giant fish, which can grow up to 45 feet (13 meters) long, second only to whale sharks in sheer size.

"They seem to nearly disappear for decades at a time and we have no idea where they might be going," Dewar told OurAmazingPlanet. "Japan, Russia, Ecuador? We also don't have any idea where the nursery for little basking sharks is."

Basking sharks live in temperate, coastal waters around the world. In decades past, they were targeted for their valuable fins and liver oil. Their numbers plummeted and continue to decline, according to the International Union for the Conservation of Nature.

NOAA scientists John Hyde and Owyn Snodgrass tagged the first Pacific basking shark just about a year ago, in June 2010. Almost a year later, in May 2011, a second, 20-foot (6 m) fish was tagged, but it prematurely shed its tracker, which was found on a beach by a surfer and sent back to the lab.

"We got very lucky to recover the tag so quickly," Dewar said, adding that although the first tagged shark provided valuable information via satellite — data such as water temperature, depth and location — scientists get even more data on the fish's habits when the tags are returned.

The tracking devices are attached just below the dorsal fin, by means of a long, spear-like pole. Tagging a fish is no easy feat, yet one made slightly easier by basking sharks' habit of swimming slowly along the ocean surface, their cavernous mouths agape to catch swarms of krill and other tiny crustaceans.

Despite their rather alarming appearance, Dewar said humans have nothing to fear from basking sharks.

"They are gentle giants," she said. "They aren't bothered by people in the water with them and have itty-bitty teeth."

There is hope that their sudden reappearance off Southern California will offer researchers a chance to finally solve some of the mysteries that surround the world's second-largest fish.

"The main misconception on our coast is that they don't occur here," Dewar said. "Hopefully, we will see more of them, and people will come to see them as a friendly neighbor."