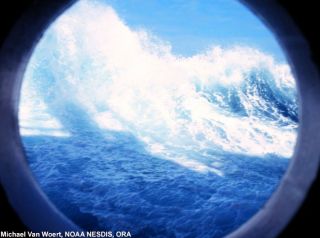 On its way to being stored in the darkest depths of the ocean, carbon may be consumed and recycled by marine organisms as it enters … the twilight zone.

However, this is no science fiction realm. It's a term used by scientists to describe a strange, but real intermediate depth in the seas where carbon can be trapped, thereby preventing it from sinking deeper where it can do no harm to Earth's climate.

“The twilight zone is a critical link between the surface and the deep ocean,” said Ken Buesseler of the Woods Hole Oceanographic Institute in Massachusetts, co-author of the new marine twilight zone study. “We’re interested in what happens in the twilight zone, what sinks into it and what actually sinks out of it.”

The deep ocean is a critical storage area for carbon, keeping it from re-entering the atmosphere as the greenhouse gas carbon dioxide.

The carbon-sink cycle starts when marine plants in the sunlit surface layer of the ocean grab carbon dioxide from the air to use in photosynthesis. When the plants die, they sink as so-called “marine snow” to the deep ocean where the carbon is stored and prevented from re-entering the atmosphere.

But the new study, detailed in the April 27 issue of the journal Science, finds that not all of this carbon makes it past the region of the ocean known as the mesopelagic or “the twilight zone”—roughly 300 to 3,000 feet below the surface where there isn’t enough light for photosynthesis—which acts as a gateway to the deep ocean below.

Animals and bacteria in the twilight zone often consume and further decompose the sinking marine snow, converting the carbon into dissolved organic and inorganic forms that can find their way back to the surface and then the atmosphere.

“Unless the carbon that gets into the ocean goes all the way down into the deep ocean and is stored there, the carbon can still make its way back into the atmosphere,” Buesseler said. “Without this long-term storage, there is little influence on atmospheric levels of carbon dioxide, a greenhouse gas that impacts earth’s climate.”

The researchers found that only 20 percent of carbon in the ocean surface made it past the twilight zone off Hawaii, and only 50 percent passed through the gateway near Japan.

Scientists aren’t sure why these regional differences are found, but they throw a monkey wrench into calculations predicting the impact of the ocean’s role in offsetting the impacts of greenhouse gases.