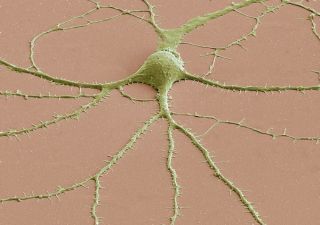 Most neurons have three parts: an axon, a cell body called a soma and dendrites. This scanning electron microscope (SEM) image shows a soma with dendrites (and their spines) radiating from it. To create SEM images, a beam of electrons is scanned across the surface of a sample, and a detector keeps track of electrons bouncing off its surface to reveal the specimen's outer shape.
(Image: © Thomas Deerinck and Mark Ellisman, 2009.)

All of our thoughts, feelings and actions rely on chemicals in our brains, which allow brain cells to talk to each other. New research indicates that it only takes a few seconds for brain cells to recollect and reuse these chemicals, which allows them endless quick communication.

Neurons talk to each other through a space called a synapse between their cell coverings called membranes. The signal-sending neuron releases chemicals, called neurotransmitters, into this space.

One of the most important parts of this process is how the cells recollect these molecules, which are made and stored in limited amounts. They use these neurotransmitters over and over, some sending dozens of signals per second. [Inside the Brain: A Journey Through Time]

The researchers collected neurons from mice and experimented with them in lab dishes. They tagged the cells' neurotransmitters with a fluorescent protein that glows in the synapse and turns off in the cell. On average, it takes about five seconds for the cells to collect up the neurotransmitters and this timeframe didn't vary much between a cell's different synapses. However, different neurons did vary a lot in their speediness, up to about fourfold, the researchers said.

"There is something about a cell that determines how fast the synapse needs to go," said study researcher Timothy Ryan, of Weill Cornell Medical College. "But we didn't find a correlation with the different types of neurons."

Figuring out how our brain cells communicate could help us learn how to repair them when they malfunction, such as during Alzheimer's disease or schizophrenia. "These synapses are very complex machines, and we are just learning how to pick them apart and find out what does what," Ryan told LiveScience. "To repair this, we have to write the repair manual for it."

The research was published this week in the journals Neuron and Nature Neuroscience.