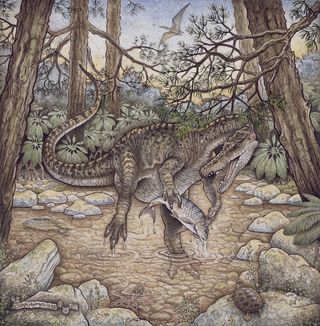 The spinatosaurid Baryonyx Walker roamed Europe during the Cretaceous. A close relative has now been found in Australia.
(Image: © Copyright: Natural History Museum, not to be used after December 31, 2011)

A mysterious group of large, crocodile-snouted dinosaurs from the northern latitudes also inhabited the land that would become Australia, a newly found fossil reveals, indicating dinosaurs got around far more than is generally thought.

The fossil is of a single vertebra, which has been traced to a group of two-legged carnivores called spinatosaurids. Some of them could grow larger than a T. rex. They lived more than 140 million years ago, but until now, it was thought that they made their homes only in the north.

The newly analyzed fossil, found in Victoria, establishes that these dinosaurs ranged across much of the globe during the early Cretaceous period that spanned 146 million to 140 million years ago. Combined with other fossil evidence, the find suggests dinosaurs were a lot more mobile than researchers suspect, said study researcher Paul Barrett of the Natural History Museum in London.

In Australia's case, the dinosaurs made the trip before the land broke off into its own island continent.

"Instead of being limited to various parts of the world, it looks like dinosaurs were able to disperse over very large distances," Barrett told LiveScience. [Illustration of croc-nosed dinosaur]

Australian researchers unearthed the vertebra during the 1990s. Since that time, the bone has been at Museum Victoria in Melbourne, awaiting analysis. Barrett came to look at the museum's backlog of bones at the behest of some Australian colleagues, he said, and the vertebra stood out.

"There aren't many sites in Australia that give us dinosaur fossils," Barrett said. "So almost anything we find from Australia has the potential to be quite interesting."

The vertebra did not disappoint. Just an inch and a half (42 millimeters) long and not yet entirely fused when the dinosaur died, it probably belonged to a juvenile. The vertebra appeared identical to that of Baryonyx walkeri, a spinatosaurid with foot-long claws that was found in Europe, suggesting the Australian spinatosaurid belonged to the same family though they aren't certain of its genus and species.

The discovery of a spinatosaurus in Australia made Barrett and his colleagues curious. During the early Cretaceous, the supercontinent Pangea was fragmenting, creating a northern supercontinent called Laurasia and a southern supercontinent called Gondwana. The latter land mass included what is now Australia. Scientists had thought that the dinosaurs likewise broke into two categories, northern and southern, with little overlap. But if spinatosaurids were running around Australia, might other dinosaurs have ranged across the globe as well?

Sure enough, when they began to look, the team found numerous reports of species spanning both Laurasia and Gondwana during this time period. In other words, dinosaurs seem to have mixed and mingled for much longer than anyone realized.

"It seems like the early-middle Cretaceous world still had a cosmopolitan flavor; the same groups of dinosaurs continued to range across the globe, even though the continents were becoming physically separated," said Stephen Brusatte, a doctoral candidate in paleontology at Columbia University and the American Museum of Natural History in New York.

Brusatte, who was not involved in the research, told LiveScience that by the late Cretaceous, the continents had separated into a configuration that would look familiar today. At that time, dinosaur species did stay true to their hemispheres: In the north, you might be pursued by a Tyrannosaurus rex, while southern animals had to be on the lookout for giant predators like the bull-horned Carnotaurus.

"The fact that we find these dinosaurs and others spread around the entire world at this time suggests they got there just before the split started to happen," Barrett said.

The research team is continuing to dig through their fossil collection, looking for more evidence of Australia's ancient beasts.