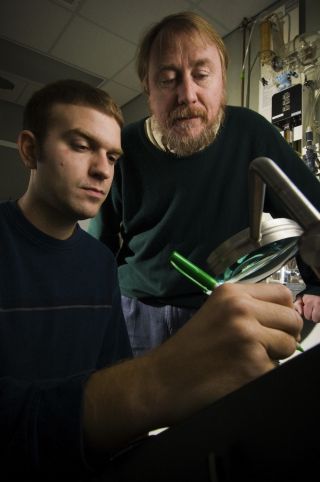 Richard Lenski oversees the count of micorganisms growing in a Petri dish used in a study of evolution.
(Image: © Courtesy of Michigan State University)

Evolutionary biologist Richard Lenski occasionally thinks of his 12 original flasks of E. coli as the experiment that keeps on giving.

He and his colleagues have nurtured these samples and their progeny — 52,000 generations and counting — for more than 23 years, every day, with no time off for holidays or weekends.

In terms of generations, it is the longest running evolution experiment in history, providing countless important insights into how bacteria mutate and adapt over time.

"It's had a life of its own," Lenski said of the study, which began in February 1988. "It's amazing how complicated this supposedly simple system has turned out to be — it's always giving us surprises.''

The 12 populations live in an incubator in Lenski's laboratory at Michigan State University, each of the dozen flasks producing about seven new generations every 24 hours. Every day, the scientists take one percent of each population and transfer it into a flask of fresh glucose, a growth medium. They also take samples every 500 generations, and freeze them for later study.

"The neat thing is that you can bring them back to life by thawing them," Lenski said. "Since we've got this frozen time series, we can do many different things. We can directly compare and even compete bacteria from different generations. We can directly measure their improvements in fitness. We can compare organisms that lived at different times. It's really like time travel."

The experiment was designed to ask about the repeatability of evolution. "If we look at the tension between the randomness of mutation and the predictability of natural selection, how does evolution play out when you put the two together?" Lenski said. "That's really what this long-term experiment has been all about. Over the course of these decades, we've seen all kinds of interesting phenomena."

They have been able to see the mutation rate itself evolve, as well as observe dramatic improvements in the bacteria's competitive ability.

Recently, for example, in work reported in an issue of Science earlier this year, the researchers found that one line of E. coli had produced two dominant genotypes after 500 generations, one of them clearly more robust than the other, growing at a rate about six percent faster. After 1,000 generations, however, only one type was left.

To the researchers' surprise, it wasn't the strain that earlier had been the stronger of the two — instead, the initially weaker one had prevailed. What had happened during those intervening generations? How did the "less fit" strain manage to win?

The researchers theorized that one of two things had happened. Either it was sheer luck for the winning strain, "like an unskilled poker player getting dealt a winning hand," Lenski said, or the strain was more adaptable and had undergone beneficial mutations that ultimately steered it to long-term improvement.

The nature of this experiment gave the researchers the ability to go back in time and reconstruct the evolutionary process. The scientists thawed some of the eventual winners from the 500th generation, and started 20 new lines. They did the same with the eventual losers. They allowed all of the thawed bacteria to reproduce for 883 generations to see again who would win — the result was usually the same. The tortoise, less fit in the short term, still beat the hare.

"We had sequenced the genomes, we knew which mutations eventually won, so we wanted to replay the lineages' histories," Lenski said. "It turns out that our second hypothesis proved correct. The strain that eventually won, even though it was less fit at the moment, had more future potential, more evolvability."

In 2008, they reported another important adaptation. One of their 12 populations had evolved the ability to use a new carbon source, citrate, for energy — a talent that its ancestor did not have.

It took more than 30,000 generations for that one population to be able to use citrate, remarkable since "the whole species of E. coli has been defined as not being able to use that carbon source," Lenski said. (Citrate long has been a standard ingredient in the growth medium "recipe" used in the Lenski lab, although the organisms had never used it before.)

"Was it a rare mutation that could've happened to any of the 12 populations, and at any point in time? Or was it an accumulation of event after event which caused this population to get on a different trajectory from the other 11?" Lenski asks. "One of my graduate students, Zachary Blount, looked at 10 trillion ancestral cells from the original ancestor of all 12 populations to see whether they could evolve this ability to use citrate. None of them did. He showed that, from the ancestor, you couldn't get there, you couldn't make a citrate-using type, by a single mutation.

However, "it became possible in the later generations, as the genetic context had changed in a way to allow this population to produce this mutation," Lenski adds. "The likelihood of being able to make this transition changed dramatically in the context of this population's history.

dddAnother graduate student in the lab, Brian Wade, has begun a spin-off experiment to see whether the bacteria can evolve in a way that makes them resistant to drying out. This could have important implications for food handling since most E. coli today "would die pretty quickly sitting out on a dry counter," Lenski said. "He's been able to show that within a few months, he can select for E. coli that are much better at surviving this stress than their ancestors were."

Over the years, the numbered flasks in the original long-term experiment have developed their own "personalities," Lenski said, with some having higher mutation rates than others that cause them to evolve differently. "The citrate population is much denser because they're not only getting glucose, but they're also getting a second helping."

About ten years ago, Lenski considered ending the experiment, but was talked out of it by his colleagues. "When I was starting to get involved in some computer-based research, I was getting a little tired of the bacteria," he said. "The never-ending experiment was almost like a yoke around my neck. But my colleagues said: 'you can't quit.' It had become too much of an institution. So now my hope is that when I retire — in 10, 15 or 20 years — I could work with a former student or scientific collaborator to pass the experiment on.''

"We do make mistakes, but that's the beauty of having frozen bacteria," Lenski said. "When we have accidents, we go back to the last time we froze them. The freezers have backups, too. We've never lost a freezer. We've had little scares, but things have always worked out."

For additional information about Lenski's work, watch the following video and read Lenski's essay, "Evolution: Past, Present and Future."