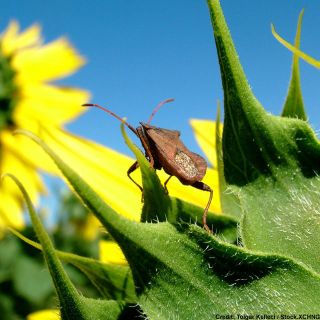 Parasitic wasps eavesdrop on the “sex talk” of female stink bugs in order to find new prey, researchers have discovered.

Thanks to their foul-smelling secretions, stink bugs seem repulsive to humans, but scelionid wasps love them—they infect stink bug eggs and then feed on them in order to survive. However, it’s not always easy for the wasps to stumble upon the eggs in the first place.

So Brazilian biologist Raúl Laumann and his colleagues wondered whether the wasps pinpointed eggs by tuning into the sexual signals that stink bugs transmit through plants by vibrating their bodies. These signals, which provide information to other stink bugs about the sender's sex, location and receptiveness to mating, also provide eavesdropping wasps with a clever way to find new host eggs

Laumann and his colleagues at Embrapa Recursos Genéticos e Biotecnologia recorded the sexual vibrations emitted by male and female Brazilian stink bugs and played them for parasitic wasps that had been placed either on green bean plants or an artificial substrate that allowed them to easily track the wasps’ movements.

In both cases, wasps moved towards the source of the vibrations from female stink bugs, but not male stink bugs—either one particular leaf of the green bean plant or one part of the film substrate. The wasps tended to choose and remain on the leaves and parts of the film that vibrated with the female songs, avoiding the parts that did not vibrate at all. In the presence of the vibrations, the wasps also appeared to be searching around with their antennae as if they knew prey might be nearby.

The wasps probably realize that eggs laid by female stink bugs could be close to the source of the vibrations, Laumann told LiveScience.

This study, published in the April issue of Animal Behaviour, is the first to show that parasites tune into insects’ vibratory sexual communication signals, he said.