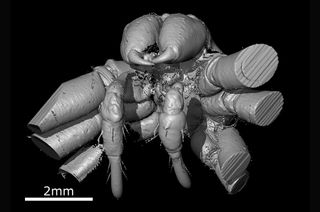 A very old spider has shown its face to the world for the first time in 49 million years, as scientists used high-tech X-ray methods to peer through the shroud of amber encasing the fossilized arachnid.

The report, published online April 28 in the journal Naturwissenschaften, confirms that the ancient spider is a member of the genus Eusparassus. These arachnids, also known as Huntsman spiders, live in the tropics and in Southern Europe today. From leg to leg, they can grow to a size of almost a foot (0.3 meters). Huntsman spiders are non-aggressive and non-toxic to humans, but they can deliver a painful bite.

The ancient spider fossil, which is housed in the Berlin Natural History Museum, is buried in a darkened chunk of amber and is barely visible. Using a method called X-ray computed tomography, researchers from Germany and the United Kingdom created three-dimensional images and movies of the spider inside the amber.

The resulting X-ray images reveal fangs, eyes and "pedipalps," or the feelers on the spider's face. [See the 3-D images]

The same method has been used to reveal other fossilized spiders.

What was around when this giant arachnid crawled what is now central Europe? Another giant, it seems, as researchers recently reported a hummingbird-size ant lived in what is now Wyoming at the time. The ancient Huntsman fossil was found in the 1800s. Naturalists then suspected that it was a Huntsman, but modern researchers thought it strange that such a large, active spider would get trapped in tree resin. By comparing the specimen to other fossils and modern spiders, however, they determined that the fossil really is a Huntsman.

"The research is particularly exciting because our results show that this method works and that other scientifically important specimens in historical pieces of darkened amber can be investigated and compared to their living relatives in the same way," study researcher David Penney of the University of Manchester said in a statement.