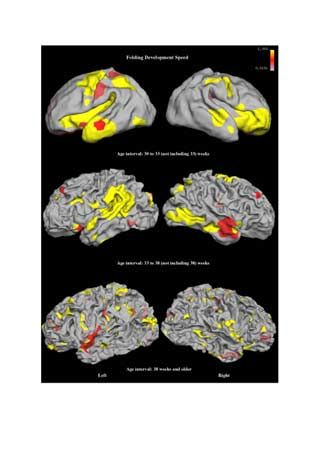 Just why the outermost surface of our brains is covered in folds and wrinkles is a mystery to scientists, but a new tool is helping researchers see how these folds develop.

“We can’t open the brain and see by eye,” said the paper’s first author Peng Yu, a Harvard graduate student. “But the cool thing we can do now is see through the MR machine.”

The team, whose research is detailed in the April issue of IEEE Transactions on Medical Imaging, examined 11 developing brains; eight were newborn babies, mostly premature, and the others were from children aged 2, 3 and 7.

The technique looked at both coarse folds, equivalent to the largest folds in a crumpled piece of paper, and smaller, finer folds.

Using a model to chart biological growth, Yu could identify the age at which each type of fold developed and how quickly it grew. She found that coarse folds developed earlier and more slowly than the fine-grained folds.

This technique may shed light on diseases like autism, schizophrenia and Alzheimer’s disease by comparing the images of these brains to those with these diseases.

“We now have some idea of what normal development looks like,” said study team member Bruce Fischl of Harvard Medical School. “The next step is to see if we can detect abnormal development in diseases like autism by looking at folding differences.”