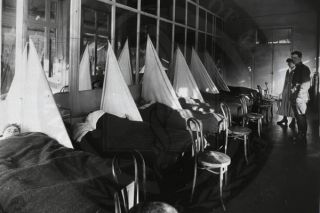 More Americans died from influenza than died in World War I.
(Image: © National Library of Medicine.)

Elderly people are often weaker than those in the prime of life, and thus become ill more easily. City dwellers are exposed to more people than folks in isolated rural areas, and encounter more contagious diseases. One might predict, therefore, that old people and city people would get hit hardest during flu epidemics.

Not so. In fact, it appears that these exposure differences drive the exact opposite outcome.

For a new study of the 1918 Spanish flu outbreak, one of the most devastating epidemics in recorded history, a group of Norwegian researchers trolled archives, church records and ethnographic data from Scandinavia, North America and Oceania for information on mortality rates in all those areas. The data they accumulated was surprising: The 1918 flu killed 50 million to 100 million people worldwide, but it didn't do so blindly. In urban communities, fewer than 1 in 100 inhabitants died from the A (H1N1) strain of flu that year, but in isolated communities, up to 90 percent died of it. Furthermore, in cities, young adults were hit hardest, while those older than 65 were largely spared.

Why? The Norwegian School of Public Health researchers postulate that urban areas bolstered inhabitants' defenses against the deadly flu strain by boosting their immunity in the years before it hit. Since city people had previously experienced greater exposure to flu strains closely related to the Spanish flu than had country people, they were better prepared to ward off the deadly strain when it arrived.

This was especially true of older people in the cities, who had probably been exposed to an H1 flu strain (related to the 1918 Spanish flu strain) that had circulated before 1890. "This would mean that some people who were older than 28 to 30 years in 1918 may have had some protection against severe infection and death from Spanish flu because of previous exposure to similar viruses." Svenn-Erik Mamelund, lead author of the study (published in the April issue of the journal Epidemics), said in a press release.

In isolated rural areas, the elderly, like the younger people in cities, had little protection from the 1918 flu as they didn't benefit from immunity developed via exposure to the earlier flu strain. "It was only in cities and countries in the West that people older than 65 years had lower-than-expected mortality. In very isolated indigenous communities, mortality was very high for all adults over 30 years of age," Mamelund said.

The Norwegian teams' observations are not limited to the 1918 epidemic; a similar effect came into play during the 2009 swine flu outbreak. "Those who are older than 65 years usually have the highest mortality associated with seasonal influenza, but because of pre-existing immunity, few elderly people became ill and died in 2009," Mameland said. "Serological studies from Europe, Japan and the USA have shown that pre-existing immunity was highest among those born before 1918, but also those born later had some protection. Those born after 1949 had little or no immunity against the A (H1N1) virus in 2009."

The key takeaway message, according to Mameland, is that pre-existing immunity is a strong defense against a deadly flu outbreak. The more people's paths you cross in life, the readier you are for what's to come.