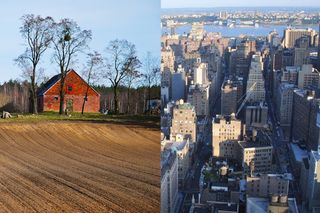 That line of reasoning fails, however, when it comes to who belts out more carbon dioxide. Despite the fact that the average city dweller may not have seen a starry night's sky for weeks, it turns out that he still manages to keep his carbon footprint smaller than that of the average person in the country. This finding by the International Institute for Environment and Development (IIED), a London-based nonprofit organization, has major implications for climate change.

"When you look at the lifestyle of people living in cities, they can often be better in terms of carbon emissions than people in the country," said David Dodman, a geographer and climate change scientist who headed the IIED research effort. "In certain cities, particularly in high-income countries but also in rapidly industrializing countries, the emissions from city dwellers were less than the average emissions form the country as a whole."

The IIED report, which was published in 2009, spawned 20 or 30 follow-up studies, all of which told a similarly positive story about urbanization. "[All of the] studies have shown that urbanization can have benefits in terms of lowering greenhouse gas emissions," Dodman told Life's Little Mysteries.

Judging by the fuming traffic or the glaring lights of Times Square, where electricity requirements of a single LED billboard typically result in 18 tons of carbon spewing into the atmosphere each year, New York City doesn't strike one as a haven of environmental friendliness. But relatively speaking, it is.

"The average emissions in New York City are about 30 percent less than the U.S. average," said Dodman. "This is because the primary factors contributing to individuals' greenhouse gas emissions are their use of energy and transportation. New York City residents tend to have smaller dwellings than the average American, so their heating needs are less, and they are also more reliant on public transportation."

Conversely, you might be able to see the stars from your back porch in rural Kansas, but that doesn't mean you're doing any favors to the environment.

"In highly industrialized countries, people living in rural areas do many things people in urban areas do, but they don't have the benefit of services and recreational activities in close proximity," Dodman explained. Most rural people regularly drive to supermarkets, shops, schools and jobs in nearby urban areas, he said. Because driving long distances is so bad for the environment, "proximity is very important for reducing your carbon footprint."

There are exceptions to the report's finding. Denver residents, for example, have carbon footprints that are slightly higher than the national average. "People in Denver tend to have large homes that need a lot of heating, and it's a sprawling city," Dodman said. "So this is not a rule."

He also warns that city dwellers in industrialized nations are by no means paragons of environmental friendliness compared to country folk. "The difference is between very high and extremely high emissions," Dodman said.

On average, Americans release more carbon into the atmosphere than anyone else: about 6 tons per person per year.