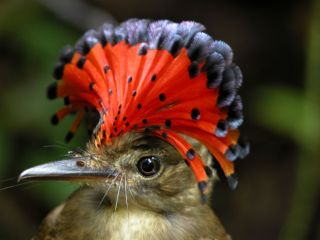 It's food scarcity, not dietary preferences, that motivates birds to migrate thousands of miles back and forth between breeding and non-breeding areas each year, new research shows.

"It's not whether you eat insects, fruit, nectar or candy bars or where you eat them--it matters how reliable that food source is from day-to-day," said study leader W. Alice Boyle of the University of Arizona.

To figure out the underlying pressures that drive some birds to leave home for the season, Boyle examined 379 related species of New World flycatchers and compared their size, food type, habitat, migratory behavior and whether or not they fed in flocks.

(New World flycatchers are one of the largest groups of birds in the Americas and include kingbirds, flycatchers, phoebes, manakins and cotingas.)

To compare the birds, the researchers constructed a "supertree" showing the exact evolutionary relationships among different species.

A computer analysis then determined whether a particular species was migratory because it ran in the "family" or whether something in the bird's environment was forcing it to leave each season.

Boyle and her colleagues found that food scarcity was the number one issue that predicted a species' migratory behavior.

"Food availability is the underlying process, not diet and habitat," Boyle said.

An alternative strategy to migrating that the birds used to deal with food scarcity was to forage in flocks, because a group is more likely to find a new patch of food than a lone individual.

"If you are faced with food scarcity, you have two options," Boyle said. "You can either forage with other birds, or you can migrate."