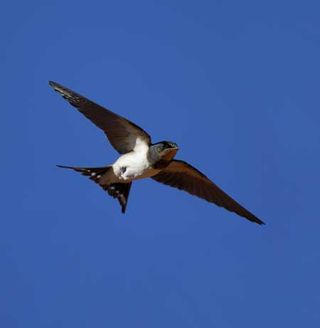 Migratory birds are adapting to changes brought on by global warming by laying eggs earlier and moving up dates for their migratory departures.

But not all birds are working with the same travel agent, a new study reveals. European birds that must wing longer distances to get to warmer winter homes set off earlier than birds making shorter trips.

The schedule changes are in response to the spring season arriving earlier. Warmer temperatures earlier in the season have caused food sources to peak earlier than in decades past, forcing birds, especially those relying on steady food supply for hatching chicks, to adapt or go hungry.

A team of Scandinavian researchers analyzed years of European migratory data for birds wintering a short distance from their breeding grounds and those that winter far away.

For example, birds wintering south of Africa's Sahara desert begin migrating back to their southern Europe and Mediterranean breeding grounds earlier than birds returning to Scandinavia from temperate Europe.

This finding challenges the conventional wisdom that species wintering in temperate Europe should respond more strongly to climate change than trans-Saharan migrants, the authors write in the June 30 issue of the journal Science.