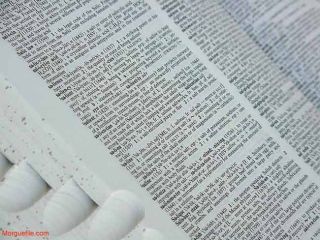 Going to college is a no-brainer for those who can afford it, but higher education actually tends to speed up mental decline when it comes to fumbling for words later in life.

Participants in a new study, all more than 70 years old, were tested up to four times between 1993 and 2000 on their ability to recall 10 common words read aloud to them. Those with more education were found to have a steeper decline over the years in their ability to remember the list, according to a new study detailed in the current issue of the journal Research on Aging.

The meaning of the results is less then clear, however.

The mechanism for this is tricky. Individuals with more education tend to have a higher starting point in their word memory, and so may initially remember more total words than their less educated peers, said study director Eileen Crimmins of the University of Southern California.

“The more education you have, the more words you’ll know to begin with,” Crimmins told LiveScience.

But the more you know, the more you have to lose. The rate from test-year to test-year at which the more educated participants lost their word-recall ability was proportionately faster, with both groups finishing with nearly identical word-recall capabilities at the study’s end.

The explanation for the faster decline of more educated individuals could possibly be that they were unable use memory tricks they once relied on to help them remember things, Crimmins said. For a while, these strategies can help them compensate, she said, but as they get older, their brains become overwhelmed and they can no longer use those strategies.

Crimmins points out that because the study didn’t follow people across their entire lifespans, there could be other unseen factors. For example, those with less education may start their cognitive decline earlier.

“Even though we find in this research that those with higher education do better on mental-status tests that look for dementia-like symptoms, education does not protect better against more normal, age-related declines, like those seen on memory tests,” said Dawn Alley of the University of Pennsylvania, a co-author of the study

The possibly protective nature against conditions like dementia could be due to a correlation between higher education and generally higher living standards, like access to better health care and better eating habits, Crimmins said.