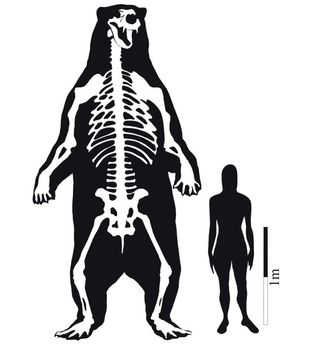 The largest land predator of its time, the South American giant short-faced bear (Arctotherium angustidens), in comparison to a person.
(Image: © Soibelzon, Schubert, Journal of Paleontology.)

The fossils of the largest known bear to have ever lived have been found, a giant that was the most powerful land carnivore of its time, scientists said.

The remains were unearthed during the construction of a hospital in La Plata City, Argentina. It was a South American giant short-faced bear (Arctotherium angustidens), the earliest and largest member of its genus (its group of species of bears). This titan lived between 2 million to 500,000 years ago, with its closest living relative being the spectacled bear (Tremarctos ornatus) of South America.

Based on measurements of the fossil's leg bones and equations used to estimate body mass, the researchers say the bear would have stood at least 11 feet tall (3.3 meters) on its hind legs and would have weighed between 3,500 and 3,855 pounds (1,588 and 1,749 kilograms). In comparison, "the largest record for a living bear is a male polar bear that obtained the weight of about 2,200 pounds (1,000 kg)," said researcher Leopoldo Soibelzon, a paleontologist at the La Plata Museum.

"During its time, this bear was the largest and most powerful land predator in the world," researcher Blaine Schubert, a paleontologist at East Tennessee State University in Johnson City, told LiveScience. "It's always extremely exciting to find something that's the largest of its class — and not just a little bit larger, but quite a bit larger."

Although this bear probably had an omnivorous diet, flesh likely dominated. Megafauna or large creatures likely played an important role in what it ate, and potentially included giant ground sloths, now-extinct relatives of elephants, camels, tapirs, and armadillo-like creatures known as glyptodonts.

"This does not imply that active hunting was its primary strategy for feeding, since its large size and great power may have permitted the bear to fight for prey hunted by other Pleistocene carnivores such as the saber-toothed cat," Schubert said. "Scavenging megaherbivore carcasses was probably another frequent way of feeding."

The research team's analysis of the bear's bones suggests it was an old male that survived a number of serious injuries during life. These might have come from battles with other males, while hunting megafauna, or during fights with other carnivores over a carcass.

The scientists also suggested the reason why this species might have grown so huge. When bears arrived in South America after the land bridge between the Americas appeared about 2.6 million years ago, there were relatively few other large predators there at the time, with the exception of the saber-toothed cat. The bears then grew, taking advantage of the large amount of prey, researchers suggested. The species eventually became extinct after more carnivores evolved in South America.

Soibelzon and Schubert detailed their findings in the January issue of the Journal of Paleontology.