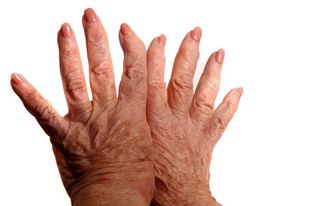 Scientists have cut in half the detection time for arthritis in dogs, a result that could eventually make the most common type of the painful joint disease reversible in man's best friend and perhaps in man, too.

Osteoarthritis, which afflicts about 21 million Americans, is a form of joint stiffness that results when cartilage between bones wears away [Arthritis 101].

The new approach involved identifying changes in 16 genes in otherwise healthy looking cartilage that happen within two weeks of the disease's onset.  Up to now, tests have been effective at detecting osteoarthritis four weeks after it starts at the earliest—sooner than most people afflicted with the condition go to a doctor.

Most osteoarthritis is diagnosed only when the mechanical pain shows up, years after onset of the disease.

The newly discovered genetic changes were correlated by James Cook of the University of Missouri's Comparative Orthopaedic Laboratory with other signs of the disease detected with MRIs, chemistry, and arthroscopy.

"In theory and based on animal model data, osteoarthritis goes through early stages in which it is osteoarthritis but is still reversible," Cook told LiveScience. "That is the really the driving force behind our work, that is, to find ways to accurately diagnose it in these early stages clinically so we really could reverse it."

Doctors currently can detect the degradation in cartilage associated with osteoarthritis once it is under way, but up to now no one has known how to detect the initial signs of the disease at the stage where it is reversible. The early detection technique might also allow doctors to accurately predict the extent and severity of how osteoarthritis will develop and this can yield to more effective drug and lifestyle treatments, Cook said.

John Hardin, chief scientific officer of the Arthritis Foundation, said Cook's work is the first to demonstrate the gene activity behind osteoarthritis.

"This research suggests that long before the patient presents with clinical signs of the disease, there would likely be genetic changes that would presage arthritis," Hardin said.

The detection advance by Cook and his colleagues including Aaron M. Stoker at the University of Misssouri, involved surgically injuring dogs' knees in a way that brought on cartilage damage that is the hallmark of osteoarthritis. The team then took DNA samples and observed the changes in the activity of certain genes. (The University of Missouri Animal Care and Use Committee deemed the experiment ethical.)

Dogs develop the signs and symptoms of osteoarthritis much faster than humans. Cook and his colleagues want to find better ways to treat osteoarthritis in people as well as animals.

"This combination results in changes in the joints metabolism that starts the process involved in arthritis, that is the swelling, cartilage loss, bone spurs, pain, and dysfunction that is osteoarthritis," Cook said.

By figuring out which genes and proteins are critical and earliest in the progress of osteoarthritis, researchers can next devise ways to control those and prevent, reverse, or at least better slow down osteoarthritis, he said.

The genetic and protein markers also are important because osteoarthritis that is detected in the first few weeks of the disease is at a point where drugs that slow cartilage degeneration and other treatments can be provided that are far more effective than if doctors and patients wait until the disease gets worse.

"We know that cartilage needs activity to live, heal and remodel, but it needs to be beneficial activity and not detrimental," Cook said.

If someone had "early osteoarthritis," changing sports or activities, from say running to biking or swimming, could be a way to let the cartilage heal.

Other possibilities for responses to early detection could include drugs, nutraceutical supplements isolated from food, surgeries, gene therapy and injections with growth factors, Cook said.

The results of this research were published in the Journal of Orthopaedic Research and Surgery.