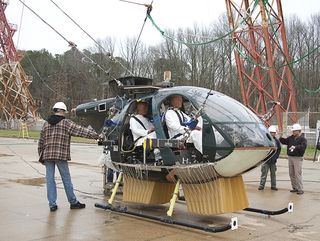 The helicopter is prepped for a crash landing in December 2009
(Image: © NASA Langley/Sean SMith)

A cushioning device originally intended for space vehicles is now being tested by NASA on helicopters that have to make crash landings. Researchers believe this so-called deployable energy absorber (DEA) could save lives and helicopters in the near future.

To gauge the DEA's effectiveness, NASA intentionally crashed an MD-500 helicopter twice at its Landing and Impact Research Facility in Hampton, Virginia — ironically the same facility where Apollo astronauts learned to land safely on the moon. To set up both crashes, engineers raised the chopper on cables and then dropped it from a height of 35 feet (11 meters). The helicopter hit the ground at about 33 miles (55 kilometers) per hour, simulating a relatively severe—yet survivable—wreck, according to NASA, especially if the impact were dampened somehow. Cameras recorded footage of the crash, and more than a hundred sensors inside the helicopter collected data for later analysis. Both abbreviated chopper flights also carried three crash test dummies, similar to the ones used in simulated automotive accidents. A fourth, creepier passenger rounded out the crew: a headless, armless torso stuffed with squishy simulated internal organs. All of the dummies were wired with sensors to help researchers piece together the stresses that a real human body experiences during crash landings. Crash course The dummies held up very well in the first smashup done in early December. The DEA softened the blow of the first crash so much so that the chopper needed only minor repairs prior to another test run. A second crash—without a DEA—was performed on March 10; the helicopter and its dummy occupants fared badly. "We had minimal damage from first test, but we saw quite a bit more damage in the second test," said Karen Jackson, an aerospace engineer at NASA's Langley Research Center in Hampton, Virginia. In the aftermath of the second run, the bottom of the windshield shattered, several bulkheads buckled and the floor of the chopper protruded into the cabin, where the dummies suffered forces powerful enough to break human necks.   NASA says the helicopter is too banged-up for a third test run. Absorbing the hit NASA's crash tests show that an energy absorber could make all the difference between people walking away from a crashed chopper and not. The DEA, akin to an automotive airbag, is made of a rigid, honeycombed Kevlar material. Its flexible hinged design allows for flat storage on a helicopter's underside until disaster looms. Once expanded, it looks like a manila-colored accordion, and deforms like one during a crash. This allows the DEA to withstand the shearing forces of an aircraft sliding along the ground at high speed, giving it great advantages over an inflatable, balloon-like bag, said Sotiris Kellas, an engineer at Langley who designed it. The device would pop into service either through manual deployment by chopper occupants who know their bird is going down, or via sensors that would detect the ground approaching at too fast a pace, for example. The deployment mechanism could use so-called gas generation like an airbag does, which is essentially a chemical reaction that puts out tremendous amounts of gas quickly. Simple mechanical methods – really little more than strings that go through the DEA – could pull it open in case of emergency as well. Inspired by space One of the DEA concept's first intended applications was to pad landings of the Orion capsule, part of the recently cancelled Constellation program to replace the retiring space shuttle. (More conventional airbag-style cushions were selected for the now-mothballed capsule.) Kellas, who designed the DEA, realized that these external safety devices could work handily on other flying craft, however, and for the past several years the technology has been adapted for use on choppers. Such impact cushioners would work well in retrofitting older aircraft that do not have special landing gear, shock-absorbing seats or restraint systems for riders, all of which is expensive to install. "You need to apply something to the helicopter's skin that doesn’t require a major retrofit," NASA's Jackson told TechNewsDaily. The technology is very close to being ready for use on helicopters, Kellas said, and with enough funding and research these DEAs could be rolled out in just a few years. "The hardest thing is to get a demonstration using a full-scale test and we've done that now," Kellas said.