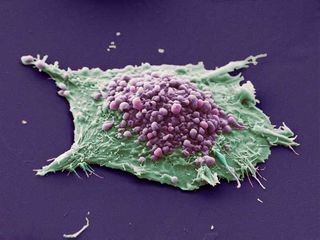 This image shows a single cell grown from a culture of lung epithelial cancer cells. The purple spheres are 'blebs': irregular bulges where the cell's internal scaffolding - its cytoskeleton - becomes unlinked from the surface membrane. This image received an award from the Wellcome Trust, as part of the annual Wellcome Image Awards, for its ability to communicate the wonder and fascination of science.

Is the common nature of cancer worldwide purely a man-made phenomenon? That is what some researchers now suggest.

Still, other specialists in cancer and in human fossils have strong doubts about this notion.

Cancer is a leading cause of death worldwide, accounting for roughly one in eight of all deaths in 2004, according to the World Health Organization. However, scientists have only found one case of the disease in investigations of hundreds of Egyptian mummies, researcher Rosalie David at the University of Manchester in England said in a statement. (The researchers did not reply to repeated queries made via phone and e-mail.)

The rarity of cancer in mummies suggests it was scarce in antiquity, and "that cancer-causing factors are limited to societies affected by modern industrialization," researcher Michael Zimmerman at Villanova University in Pennsylvania said in a statement. "In an ancient society lacking surgical intervention, evidence of cancer should remain in all cases."

Zimmerman was the first to diagnose cancer in an Egyptian mummy by analyzing its tissues on a microscopic level, identifying rectal cancer in an unnamed mummy who had lived in the Dakhleh Oasis during the Ptolemaic period 1,600 to 1,800 years ago.

David and Zimmerman also analyzed ancient literature from Egypt and Greece for hints of cancer, as well as medical studies of human and animal remains going back to the age of dinosaurs. They suggested evidence of cancer in animal fossils, non-human primates and early humans was scarce, with a few dozen uncertain examples. As they analyzed ancient literature, they did not find descriptions of operations for breast and other cancers until the 17th century, and the first reports in the scientific literature of distinctive tumors have only occurred in the past 200 years, such as scrotal cancer in chimney sweepers in 1775, nasal cancer in snuff users in 1761 and Hodgkin's disease in 1832.

One possible reason cancers might have been comparatively rare in antiquity is that the short life span of individuals back then precluded the development of the disease. Still, the researchers did note some people in ancient Egypt and Greece did live long enough to develop such diseases as atherosclerosis, Paget's disease of bone, and osteoporosis.

David and Zimmerman therefore argue that cancer nowadays is largely caused by man-made environmental factors such as pollution and diet. They detailed their findings in the October issue of the journal Nature Reviews Cancer.

"In industrialized societies, cancer is second only to cardiovascular disease as a cause of death, but in ancient times, it was extremely rare," David said in a statement. "There is nothing in the natural environment that can cause cancer."

Despite that statement, dinosaurs did develop cancer well before humans were on the scene. Also, others argue the short life spans of antiquity could be a profoundly effective reason as to why cancer might have been rare then.

Another concern when examining the fossil record is that skeletal remains might not preserve cancers very well. "To see cancers with the skeletal record, you really have to have a tumor that's affecting bone," paleoanthropologist John Hawks at the University of Wisconsin at Madison said in a phone interview. "Although there might be few confirmed diagnoses of tumors in bones, it's because cancer is a difficult diagnosis to make from bone."

Hawks did note that modern lifestyles could certainly lead to much higher rates of cancer than in the past, but not necessarily due to pollution.

"When it comes to cancers such as breast cancer, we know the age that a woman first has children or not makes a lot of difference in whether they get breast cancer, and back then people had children early, which would have put them into a lower-risk category," Hawks said.