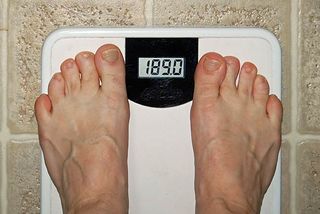 A person weighs himself.
(Image: © dreamstime.com)

Scientists this week are reporting a breakthrough therapy to lower the risk of developing the most common and deadly chronic diseases — diabetes, cardiovascular disease and cancer — by about 80 percent.

In some ways, this might sound like old news. The therapy is called taking care of yourself: not smoking, exercising regularly, eating a healthy diet and maintaining a healthy weight.

True, you'd have to be smoking something hallucinogenic to not understand that cigarettes are unhealthy. Take away cigarettes, and you take away lung cancer and a good deal of heart disease. Similarly, the mantra of eating right and exercising has been drilled into us. Pork rinds and videogame expertise does not a healthy body make.

What's new, though, is evidence of the cumulative protective effect provided by all four healthy factors. The research, published in the current issue of the Archives of Internal Medicine, involves over 23,000 Germans and is part of a larger, ongoing European study on lifestyle choices and disease.

Americans, an ever ingenious and resourceful lot, are now debating how to have a world-class healthcare system without paying for it through higher taxes or taking steps to improve their health. Maybe we'll succeed; we've defied gravity before. But this radical idea of taking care of yourself could help.

Chronic diseases are expensive because, as the name implies, they stay around usually for the rest of your life. This adds up in terms of drug costs, surgery, hospital stays, missed work and lower productivity.

The way it was

Cancer is difficult to cure simply with lifestyle changes. Lung cancer would go away, but the four aforementioned health factors contributed to "only" a 36-percent reduced risk of all cancers on average.

Diabetes, on the other hand, doesn't need to exist. And it hardly did exist until the 20th century. The researchers found that four health factors contributed to a 93-percent reduced risk in developing diabetes among the people in the study.

Heart disease, too, is largely preventable. Here the risk of a heart attack was lowered by 81 percent. In fact an unrelated study, also published this week, in PLoS ONE, suggests that heart attacks and strokes may have been rare for the vast majority of human history.

For this PLoS One study, team led by Michael Gurven of University of California, Santa Barbara, studied a remote Amazonian tribe in Bolivia known as the Tsimane. They found that peripheral arterial disease does not increase with age in this population despite risk factors found in industrialize countries, such as chronic inflammation and tobacco use. The implication is that these risk factors become deadly only in the context of an unhealthy diet and an inactive lifestyle.

Of course, life isn't a paradise in the Amazon. Life expectancy is around 50 years, and half the Tsimane die from infectious or parasitic disease. Other leading causes of death are accidents and violence. Yet they remain mostly remarkably fit throughout life. This is the natural state for humans.

Genetics do play some role in chronic disease.

For example, some people pack on extra pounds easily. Yet as the German study and other large studies are revealing, the obesity epidemic is mostly driven by lifestyle choices. The genetic predisposition, if any, is not the ease in gaining weight but the difficulty in losing it.

More certain is American's genetic predisposition to rely on liposuction, stomach stapling, angioplasty, bypass surgery, dialysis and lots and lots of prescription drugs to fight disease. But the key to affordable healthcare, according to these two studies, is to pay for disease prevention, not treatment — and, perhaps, to avoid poisonous blow darts.