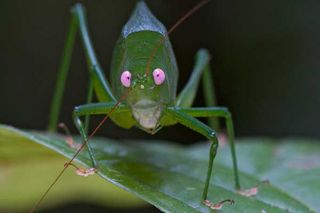 Piotr Naskrecki hunts katydids with sound. The insects are masters at blending in with their environment, especially at night when they're most active. So entomologists like Naskrecki, a researcher at the Museum of Comparative Zoology at Harvard University, trace the katydids through the darkness by their calls, using special equipment to translate the high-pitched chirping into sounds detectable by the human ear.

Last year in Papua New Guinea, these blind katydid chases paid off. Exploring the remote rain forests of the island with a team of scientists convened by Conservation International, Naskrecki found himself discovering five to 10 new katydid species per night.

"In some cases, nearly 80 percent of what I found was new to science," Naskrecki told LiveScience. "Almost every species I collected was new, or it was something that had not been seen for 100 years or so. To me, it was like landing on another planet."

The new katydids were just a portion of the 200 new species found in April and September 2009 by the Conservation International Rapid Assessment Program, which announced the discoveries today (Oct. 5). Among the other new organisms discovered during the two monthlong expeditions to Papua New Guinea were a white-tailed mouse, 24 new species of frog, nine new plants, 100 new insects and 100 more new species of spider. [See images of some of the new creatures ]

Many of the species are found only in the forests of the rugged Nakanai and Muller mountain ranges of Papua New Guinea. The researchers hope that the discoveries will inspire conservation in the area, which is under threat from loggers, oil and gas exploration, and agriculture.

The Rapid Assessment Program, now in its 20th year, is designed to get into remote areas and quickly survey the ecosystem. Research teams on the New Guinea expeditions spent about four weeks in each range, camping for a week at three to four different elevations to get a feel for biodiversity at each spot . The remote areas are reachable only by foot or by helicopter with the help of local guides.

The teams found a cornucopia of previously undiscovered species, including a yet-unnamed katydid with the largest head of any katydid ever discovered (equipped with enormous jaw muscles for cracking seeds) and the highest-altitude ants ever found (the insects, genus Strumigenys, live at about 9,840 feet, or 3,000 meters).

"It's really rare to find so many new species to science," said Conservation International biologist Leeanne Alonso, who heads the Rapid Assessment Program. "Usually you find 10 or so. Each of these expeditions had around 100."

Among the other species found:

For now, the researchers say, the forest home of the new species is likely to stay intact. But that may not be the case for long. Papua New Guinea is becoming a hot spot for oil and gas exploration. Timber, agriculture and mining also threaten the forests.

"I'm hoping that what we've demonstrated is that this area needs protection," Naskrecki said. "Papua New Guinea is on the verge of becoming an industrialized country."

Both areas in the study are being considered as additions to UNESCO's World Heritage List, which would afford the forests some protection, Alonso said. The researchers hope the discoveries of species found only in the forests will help make a case for conservation.

"It's very difficult to protect something if you cannot really name it," Naskrecki said. "Naming species is the first step in their conservation."