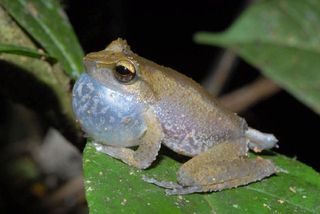 A frog, Litoria sp., believed to be new to science, and which uses a loud ringing song to call for a mate, was discovered in a rainforest during a Conservation International (CI) led Rapid Assessment Program (RAP) expedition of Papua New Guinea's highlands wilderness in 2008.
(Image: © Steve Richards)

A tiny chirping frog, a striped gecko and dozens of species of jumping spiders — all thought to be new to science — have been found in one of the largest undeveloped areas of Papua New Guinea, scientists announced today.

The discoveries were made during a month-long exploration of the Pacific nation's central mountains by scientists with Conservation International (CI) in July and August 2008.

More than 600 species were documented during the expedition. Of those, 50 spider species, two plants, three frogs and the gecko are thought to be new to science.

The three frogs include a tiny brown frog with a sharp chirping call (Oreophryne sp.), a bright green tree frog with enormous eyes (Nyctimystes sp.), and a torrent-dwelling frog that has a loud ringing call (Litoria sp.). The gecko (Cyrtodactylus sp.) was the only specimen of its kind found in the dense rainforest.

The discovery of three entirely novel genera from among the spider species discovered is particularly noteworthy, said expedition scientist Wayne Maddison of the University of British Columbia. They shed light on a branch of the evolutionary tree previously thought to be sparse.

Jumping spiders are found in every part of the world except Antarctica. Capable of jumping 30 times their body length, some of the 5,000 documented species are common in households. They come in many shapes and sizes, some resembling ants or beetles.

Two of the jumping spiders' eight eyes have evolved to be large with high-resolution vision to spot prey. Female jumping spiders also use this heightened visual sense to watch males, who show off their colorful bodies during courtship dances.

Maddison said the smaller animals — like insects and spiders — and plants may hold the secret to many of the world's unknown chemicals.

"Spider venom has evolved for millions of years to affect the neurological systems of the spider's insect prey, and each species of spider gives us another opportunity to find medically useful chemicals," says Maddison. "Jumping spiders with their remarkably miniaturized yet acute eyes could help us understand how to push the limits of vision. In addition to filling in the gaps in our planet's natural history, exploring spider biodiversity and evolution could potentially inform fields as diverse as medicine and robotics."

CI plans three more expeditions to the country in 2009, with the first beginning in early April.