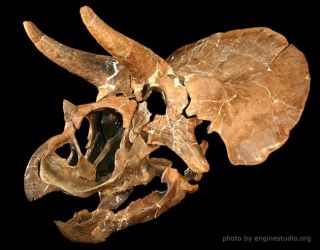 Mounted version of one of the juvenile Triceratops skulls from Hell Creek Formation in Montana.
(Image: © enginestudio.org)

A three-horned dinosaur long known as Torosaurus may actually represent an adult Triceratops, according to paleontologists.

The conclusion overturns a century-old belief about Triceratops and Torosaurus representing two different dinosaur species. Triceratops had a three-horned skull with a short frill, compared with the much bigger frill of the three-horned Torosaurus skull that included two large holes.

John Scannella, a paleontologist at Montana State University in Bozeman, investigated the Triceratops mystery alongside famed paleontologist Jack Horner. Their findings appear in a paper published in the July 14 issue of the Journal of Vertebrate Paleontology.

"Paleontologists are at a disadvantage because we can't go out into the field and observe a living Triceratops grow up from a baby to an adult," Scannella said. "We have to put together the story based on fossils. In order to get the complete story, you need to have a large sample of fossils from many individuals representing different growth stages."

The paleontologists drew upon a 10-year study of the Hell Creek Formation in Eastern Montana, which yielded Triceratops skulls ranging from the size of footballs to the size of small cars. The specimens dated back to the Cretaceous Period that ended with mass dinosaur extinction around 65 million years ago.

By contrast, Torosaurus specimens appeared much rarer, and none came from young immature animals. All the skulls uncovered by researchers appeared massive.

"If Torosaurus is actually the mature form of Triceratops, we must ask why 'Torosaurus' specimens are relatively rare compared to Triceratops," Scannella said. "It is possible that mortality was fairly high for Triceratops before they reached their fully mature morphology."

Scannella and Horner looked at more than 50 Triceratops specimens, including 30 from the Hell Creek Formation that were housed at the Museum of the Rockies. Microscope examinations showed how the skull tissues in the Torosaurus specimens had been heavily remodeled, much more than those of the largest Triceratops specimens. The researchers spent three years trying to look for alternative explanations, but finally agreed that the adult Triceratops explanation made the most sense. Their elimination of Torosaurus as a separate species also supports the theory that dinosaur diversity was lower at the end of the Cretaceous Period than previously thought.

"A major decline in diversity may have put the dinosaurs in a vulnerable state at the time when the large meteor struck the Earth at the end of the Cretaceous Period," Scannella said. "It may have been the combination of the two factors -- lower diversity and a major global catastrophe -- that resulted in the extinction of all the non-avian dinosaurs."

Such lower levels of diversity may have come about because of environmental circumstances such as large-scale changes in sea level or climate change, Scannella said.