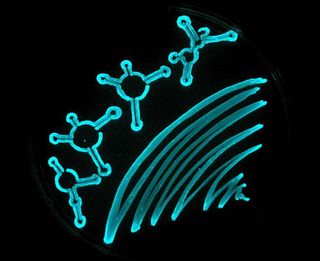 Molecular biologist Bonnie Bassler studies how bacteria communicate using a chemical language, a process known as quorum sensing. Here, a petri dish is swabbed with a culture of bioluminescent marine bacteria. The shapes at the left side of the dish are sketches of the four RNA molecules that control quorum sensing in these talkative bacteria.
(Image: © Dr. Jennifer Henke, Princeton University.)

Bonnie Bassler spends her days listening to bacteria talk to one another, and what she has overheard may surprise you.

It turns out that these tiny single-celled organisms are taking roll call. Each whispered conversation is an attempt to count how many of their own kind are present before they try to mount an attack on their host organism, which might very well be your body.

As Bassler explains it, bacteria "are too small to have an impact on the environment if they simply act as individuals." What they lack in size, though, they make up for in numbers. While each of our bodies contains about a trillion of our own cells, we also play host to 10 trillion bacterial cells, residing either on our skin or inside our organs.

While not all of these bacteria are bad for us, some are invaders who mean us harm, and when the numbers of, say, cholera bacteria increase to a certain critical level, watch out — those whispered conversations can turn into a coordinated attack as the mass of cholera bacteria begin to release toxin all at once.

Bacteria communicate using a chemical language, releasing small molecules into the surrounding medium that can be detected through receptors on the surfaces of other bacterial cells. When a critical number of signaling molecules is reached, each individual bacterium knows that enough of its friends are now nearby to launch into action. This process is known as quorum sensing.

Bassler's work in bacterial communication grew from her interest in determining how information flows between cells in our own body. "If we can understand the rules or paradigms governing the process in bacteria," she said, "what we learn could hold true in higher organisms."

While quorum sensing is used by virulent bacteria to infect their hosts, it is also used by other microbes for more benign coordinated actions. A vivid example occurs in the Hawaiian Bobtail Squid, which hunts at night while producing light with its own body. The light is actually created not by the squid, but by a mass of bioluminescent, marine microorganisms known as vibrio fischeri that the squid carries within its body.

Each v. fischeri bacterium can produce light on its own, but the glow would be so feeble as to be undetectable, so the microbe shuts down its light-producing machinery when only small numbers of bacteria are present. In this way, it can reserve its stores of light-producing molecules until sufficient numbers of its brethren exist to make a bright, visible light.

The squid's packet of light-producing bacteria grow and divide throughout the day, multiplying within the squid's body and sending out chemical signals now and then to take a census. Just about the time nightfall occurs, the population reaches a significant enough size that total light production would be detectable. When that point is reached, the population of v. fischeri bacteria simultaneously switches on their light-producing apparatus and the glowing squid swims off to begin its hunt.

Since virulent microbes, such as the vibrio cholerae bacterium that causes the disease cholera, rely on quorum sensing to coordinate their attack on our bodies, Bassler’s work is helping scientists devise new types of antibiotics.

The new drugs would work by blocking either the release of the quorum signaling molecule or by plugging up its receptors — in other words, blocking the ability of the bacteria to either speak or hear. In this way, the bacteria never know if enough of their numbers are present to release toxin, so infection is averted.

This method of interfering with bacterial communication would constitute an entire new class of antibiotics, which could be of help in dealing with antibiotic-resistant strains that have developed in recent years.

In addition to stopping bad bacteria such as v. cholerae, Bassler suggests that her insights about quorum sensing could help improve the action of the good bacteria in our bodies, such as those in our intestines that help us digest food. She also believes that understanding the mechanism by which bacteria communicate can lead to even more profound insights, such as determining how the vast array of cells within our bodies works as an integrated whole.

Our cells use a communication mechanism that is very similar to quorum sensing. Some of our body's cells release chemical signals, such as hormones or neurotransmitters, which are detected by other types of cells via a process strikingly similar to that used by quorum sensing bacteria. This chemical communication is, in fact, used by our cells to keep them organized — we never see heart cells becoming confused and acting like skin cells or kidney cells, for example.

And, it is the lowliest of organisms — bacteria — to whom we owe thanks for this complex symphony of chemical signals that keep our body's cells sorted out and in their proper places. Our body functions as one integrated whole thanks to a simple chemical communication process developed long ago by the tiny creatures for one simple reason: to count noses and see how many of their friends were there.