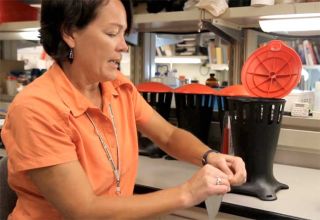 A trap that lures mosquito moms-to-be could help stop the spread of dengue fever, researchers at Tulane University report.

The trap, a gallon-size bucket, contains a mixture of chemicals that convince female mosquitoes that it is a perfect spot to lay eggs. But once the mosquitoes fly into it, they find not a stagnant puddle, but insecticide.

"Right now there has really been nothing that can be safely used on a wide, multinational scale to reduce dengue transmission," Dawn Wesson, a professor of tropical medicine, said in a statement. "If this trap works, we think it can change a lot of people's lives."

Wesson and her colleagues are beginning a pilot study in Peru to find out if the traps are effective.

Scourge of the tropics

Dengue fever is a major cause of disease and death in tropical areas. People infected by the mosquito-borne virus come down with a high fever and red rash. Symptoms include aches, pain, nausea and vomiting. Regular dengue fever is not usually deadly, according to the Centers for Disease Control and Prevention, but a more severe version of the virus, dengue hemorrhagic fever, can be.

The CDC estimates there are over 100 million cases of dengue fever worldwide each year.

The only way to stop transmission of dengue fever is to stop the mosquitoes that carry it, Wesson said. She is hoping the new traps, funded by a $4.6 million grant from the Bill & Melinda Gates Foundation, will do just that.

The traps target female mosquitoes, which feed on human blood right before laying their eggs. Because the insects have just fed, they may be contaminated with infected blood and are more likely than a hungry mosquito to spread the dengue virus. But before the bug bites someone else, she'll want to lay her eggs — and Wesson wants to be sure that's the last thing she does.

"If we can lure that mosquito in and kill her before she has the next blood meal, then we can stop that transmission," Wesson said. "If you do that enough times, you can actually stop the transmission of dengue or any other mosquito-borne pathogen."

The trap looks like a mini-trashcan and contains a chemical mixture that mimics the smell of decay present in mosquito breeding grounds. Pesticide in the traps kills the eggs, and an insecticidal fabric inside the trap kills the adult mosquito.

Wesson and her colleagues plan to place two to three traps in homes in Iquitos, Peru, a city of more than 300,000 people in the Amazon rainforest. Residents simply have to fill up the traps weekly and swap out components every couple of months. After a year, the researchers will compare the number of mosquitoes and dengue fever cases in areas with traps versus similar areas with no traps.

If the traps work out, the researchers plan to test them in the Caribbean and Thailand. The method could keep people from having to spray insecticides into the environment, Wesson said in a Tulane video demonstrating the traps.