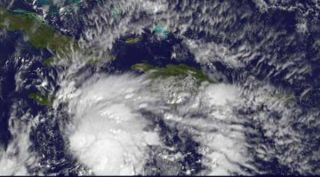 Satellite images from the space agency (NASA) taken today (Nov. 4) confirm that Tropical Storm Tomas is intensifying and its cloud tops have chilled over the past 24 hours – a sure sign of stronger thunderstorms that power the tropical cyclone.

The infrared imagery was captured by the Atmospheric Infrared Sounder (AIRS) instrument that flies aboard NASA's Aqua satellite. The GOES-13 satellite also captured a visible image of Tropical Storm Tomas on Nov. 4.

At 8 a.m. EDT today, Tomas had maximum sustained winds near 50 mph, and further strengthening is expected as wind shear remains light and sea surface temperatures remain warm. Tomas was located about 150 miles south-southeast of Kingston, Jamaica, and 305 miles southwest of Port Au Prince, Haiti. It was moving north-northwest near 6 mph.

Hurricane hunter aircraft detected a drop in atmospheric pressure within Tomas at 8:30 a.m. EDT, another indicator a tropical cyclone is strengthening. (The term tropical cyclone includes hurricanes and typhoons.)

Satellite imagery shows scattered showers and thunderstorms associated with Tomas are in the area between 15 and 19 degrees North and 67 to 79 West, covering a large area.

AIRS infrared satellite imagery showed another area of showers and thunderstorms with strong convection, located to the southwest of Tomas. Computer models indicate that those showers are associated with a monsoon trough, or an elongated area of low pressure. That trough stretches a long distance from southwest of Tomas west to Costa Rica and into the eastern Pacific Ocean.