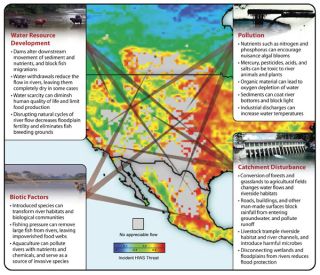 A new global analysis of threats to water security reveals widespread problems facing humans and biodiversity arising from 23 distinct stressors grouped into four categories. The resulting map reflects the fact that regions with high cumulative threat levels suffer from many types of stressors, and each stressor category shows a complex geographic distribution.
(Image: © Barry Carlsen, Copyright University of Wisconsin Board of Regents)

The world's rivers are in crisis, which could have a dire impact on the 5 billion people who live near them and rely on them for freshwater, as well as the thousands of species that call them home, a new study finds.

Over many millennia, humans have exerted an increasing influence on freshwater resources. Rivers, in particular, have attracted humans and have been altered through dam building, irrigation and other agricultural and engineering practices. In recent times, chemical pollution, burgeoning human populations and the global redistribution of plants, fish and other animal species — invasive creatures all — have had far-reaching effects on rivers and their aquatic inhabitants.

The new findings on the threats facing Earth's rivers come from the first global-scale initiative to quantify the impact of these stressors on humans and riverine biodiversity. The research team produced a series of maps documenting the influence of numerous types of threats to water quality and aquatic life across the world's river systems.

"We've integrated maps of 23 different stressors and merged them into a single index," said team member Peter McIntyre of University of Wisconsin-Madison. "In the past, policymakers and researchers have been plagued by dealing with one problem at a time. A richer and more meaningful picture emerges when all threats are considered simultaneously."

Some of the stressors to rivers that were analyzed include:

"Rivers around the world really are in a crisis state," McIntyre said.

The researchers noticed that rivers in different parts of the world are subject to similar types of stresses, regardless of their presence in a developed or developing nation, such things as agricultural intensification, industrial development, river habitat modification and other factors.

"Flowing rivers represent the largest single renewable water resource for humans," said team member Charles J. Vörösmarty of the City University of New York. "What we've discovered is that when you map out these many sources of threat, you see a fully global syndrome of river degradation."

"What made our jaws drop is that some of the highest threat levels in the world are in the United States and Europe," McIntyre said. "Americans tend to think water pollution problems are pretty well under control, but we still face enormous challenges."

One of the project's goals is to support international protocols to be used for water system protection.

The findings are detailed in the Sept. 30 issue of the journal Nature.

This article is provided by OurAmazingPlanet, a sister site of LiveScience.