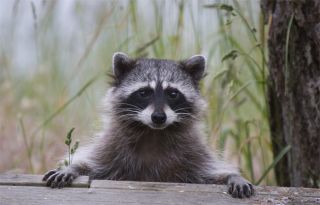 Lab rats may have won the cage fight to become model animals for research, but psychologists once looked to raccoons as the stars for studying intelligence.

Black-masked raccoons served as favored test subjects for several U.S. psychologists during the early 20th century, because their supposed curiosity and intelligence was considered just shy of that found in monkeys. Yet the furry scoundrels proved tricky to maintain in large numbers, as opposed to the smaller rats that became the darlings of labs.

Researchers complained about raccoons trying to gnaw through their cage bars and occasionally escaping to hide out in the lab ventilation systems. Even raccoon fans, such as New Haven veterinarian and eugenicist Leon Whitney, hoped to make experiments easier by creating a breed "as docile and reliable as the kindliest breeds of dogs" in the 1930s.

"Leon F. Whitney's vision of breeding a more pliable strain of raccoons strikes me as interesting, but it remained a fantasy," said Michael Pettit, a historian of science at York University in Toronto.

The raccoon experiments eventually fell out of favor because of the practical challenges. But their unpopularity also marked a move away from comparative psychology that looked at many animal species to deduce human insights, and toward behavioral studies focused largely on rats, Pettit said.

Pettit sifted through published research papers, letters and photographs from the 1900s and 1910s to find out why raccoons failed to catch on as lab rats. His findings are detailed in the September issue of The British Journal for the History of Science.

Raccoons acquired a reputation for "knavery" as light-fingered pranksters in the public imagination around the turn of the 20th century, because of their sensitive touch and curiosity. Many served as semi-domesticated pets in rural U.S. towns and in cities.

Some researchers who studied raccoons, such as Lawrence Cole of the University of Oklahoma, became convinced the animals represented a unique model of animal intelligence. He and others even suggested that raccoons could hold mental imagery in their brains and learn through imitation.

Experiments, however, didn't show any evidence of raccoons' imitation abilities.

Still, the raccoons demonstrated impressive lab results even when they weren't eagerly pawing through the pockets of researchers who had come to check on their cages.

One series of delayed-reaction experiments conducted by Walter Hunter at the University of Chicago included 22 rats, two dogs, four raccoons and five children, from Oct. 1910 until April 1912.

The test required the animals and children to correctly identify one of three light bulbs that would briefly turn on. But there was a twist: They had to remember which bulb had turned on after a certain period of delay, during which Hunter tried to distract the animals with yelling. He treated the children more gently by distracting them with drawing, stories and questions.

But Hunter remained impressed by how raccoons could run around during the delay and claw at their cages, while dogs and rats had to keep their bodies pointed toward the correct light bulb. Unlike the other animals, 89 percent of the correct identifications by raccoons took place when their bodies had the wrong orientation. Only the children demonstrated a similar capability.

Findings such as Hunter's led to huge disagreements about whether raccoons truly possessed minds. Whereas Cole had said raccoons could hold mental images and ideas in their heads, Hunter rejected the idea and instead suggested the animals relied on simpler "sensory thoughts" within the muscles.

Their debate represented a larger conflict surrounding the rise of behaviorism, which emphasized how animals could learn behaviors through conditioning. A famous example comes from Ivan Pavlov training dogs to salivate in response to certain stimuli ranging from whistles to electric shocks.

Behaviorists preferred observation of controlled and measurable behaviors, and saw animals as stimulus-response machines. They disputed the notion that animals such as raccoons could possess minds.

But even famed psychologist John Watson (who started the field of behaviorism) admitted that the raccoon experiments seemed scientifically valid, and he could not find a behaviorist explanation for their abilities.

Living in the borderlands

The rise of lab rats reflects both practicality and the need to have comparable experiments for methodological reasons, Pettit explained. But he added the absence of raccoons and other lab animals undoubtedly influenced the behavioral experiments of that era, and shaped the science that followed.

"As a historian, I am interested in what kinds of populations become invisible and come to represent everyone, and which are studied for their own idiosyncrasies," Pettit told LiveScience in an e-mail.

The situation did not go entirely unrecognized, as evidenced in a 1949 address by Frank Beach, then president of the American Psychological Association's Division of Experimental Psychology. He complained about the lack of truly comparative animal psychology and the relatively poor "rat psychology" that had taken its place.