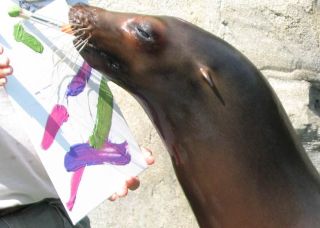 A painting by a sea lion at the Audubon Zoo in New Orleans will go on auction during the Sept. 16 "Art by Animals" event conducted by the Auction Network.
(Image: © Audubon Zoo)

Artwork made by kangaroos, rhinos, ocelots and giraffes living in the nation's zoos and aquariums will be auctioned live online next week.

These pieces will be joined by paintings by red pandas, frogs, Komodo dragons, elephants and other animals living in facilities accredited by the Association of Zoos and Aquariums during the Sept. 16 "Art by Animals" event conducted by the Auction Network.

Art can be a valuable form of enrichment for animals housed in zoos and aquariums, said AZA President and CEO Jim Maddy, adding that creating art is safe for the animals and that the paints are non-toxic and washable.

"Some animals use a paintbrush while others chose to paint with their paws, claws, tails and scales," Maddy said.

Animal art is not entirely new. In 1998, two Russian artists started a painting school for elephants at the Thai Elephant Conservation Center in Lampang, Thailand. It takes about a day to discover if an elephant has an aptitude for painting, according to the Elephant Art Gallery, a Web site dedicated to promoting elephant art. After that, elephants are trained for about a week to see if they have the skill and talent to make sellable paintings.

Man's best friend also has been known to have an artistic streak. Tillie (short for Tillamook Cheddar), a Jack Russell terrier that lives in Brooklyn, has been described as an abstract impressionist and one of the most successful animal artists in the world. Her work has shown in 17 solo exhibits, including some in Europe, and collectors have paid hundreds and sometimes thousands of dollars for one of her pieces.

The upcoming auction will feature appearances by Jack Hanna, director emeritus of the Columbus Zoo and Aquarium in Ohio, and British wildlife presenter Nigel Marven.

A pre-show, set for 4 p.m. EST, will be followed by the 5 p.m. live auction. Auction Network is a 24/7, multimedia network dedicated to auctions. The entire catalog is at www.auctionnetwork.com/aza, along with video bios on animal artists and an opportunity to place proxy bids before the auction begins.