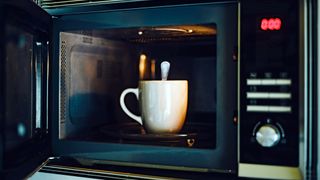 It's early morning and your bleary-eyed attention has turned to a helping of instant oatmeal. You put the bowl in the microwave, hit the start button and suddenly panic as a mini-fireworks performance goes off in your kitchen. The spoon — you forgot the spoon in the bowl!

While movies might have you believe this electric scenario can lead to a fiery explosion, the truth is that placing a spoon in the microwave is not necessarily dangerous. But why exactly does metal generate sparks when subjected to one of the miracles of mid-20th century technology?

To answer that, we need to first understand how a microwave works. The little oven relies on a device called a magnetron, a vacuum tube through which a magnetic field is made to flow. The device spins electrons around and produces electromagnetic waves with a frequency of 2.5 gigahertz (or 2.5 billion times per second), Aaron Slepkov, a physicist at Trent University in Ontario, told Live Science.

Related: What Are Microwaves?

For every material, there are particular frequencies at which it absorbs light particularly well, he added, and 2.5 gigahertz happens to be this frequency for water. Since most things we eat are filled with water, those foods will absorb energy from the microwaves and heat up.

Interestingly, 2.5 gigahertz is not the most efficient frequency for warming water, Slepkov said. That's because the company that invented the microwave, Raytheon, noticed that the highly efficient frequencies were too good at their job, he noted. Water molecules in the top layer of something like soup would absorb all the heat, so only the first few millionths of an inch would boil and leave the water underneath stone cold.

Now, about that sparking metal. When microwaves interact with a metallic material, the electrons on the material's surface get sloshed around, Slepkov explained. This doesn't cause any problems if the metal is smooth all over. But where there is an edge, like at the tines of a fork, the charges can pile up and result in a high concentration of voltage.

"If it's high enough, it can rip an electron off a molecule in the air," creating a spark and an ionized (or charged) molecule, Slepkov said.

Ionized particles absorb microwaves even more strongly than water does, so once a spark appears, more microwaves will get sucked in, ionizing even more molecules so that the spark grows like a ball of fire, he said.

Usually, such an event can occur only in a metal object with rough edges. That's why "if you take aluminum foil and put it in a flat circle, it might not spark at all," Slepkov said. "But if you crumple it into a ball, it will spark quickly."

While these sparks have the potential to cause harm to the microwave oven, any food should be perfectly fine to eat afterward (just in case you really did forget that spoon in your oatmeal), according to an article from Mental Floss.

Metals are not the only objects that can generate a light show in a microwave. Viral internet videos have also shown halved grapes producing spectacular sparks of plasma, a gas of charged particles.

Various sleuths had searched for an explanation, suggesting that it had to do with a buildup of electric charge like in a metal. But Slepkov and his colleagues conducted scientific tests to get to the bottom of the phenomenon.

"What we found was much more complicated and interesting, " he said.

By filling hydrogel spheres — a superabsorbent polymer used in disposable diapers — with water, the researchers learned that geometry was the most important factor in generating sparks in grape-like objects. Grape-size spheres just happened to be particularly excellent concentrators of microwaves, Slepkov said.

The grapes' size caused the microwave radiation to amass inside the tiny fruits, eventually resulting in enough energy to rip an electron from sodium or potassium inside the grape, he added, creating a spark that grew into a plasma.

The team repeated the experiment with quail eggs — which are roughly the same size as grapes — first with their natural, yolky interiors and then with the liquid drained out. The goo-filled eggs generated hotspots, while the empty ones did not, indicating that mimicking the metal-sparking spectacle required a watery, grape-size chamber.