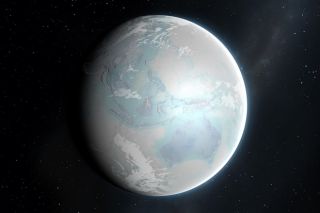 Imagine the Chicago skyline. Now imagine it under nearly 2 miles (3 kilometers) of ice. That's what the landscape looked like at the peak of the last ice age.

In the scope of Earth's recent geologic history, this wouldn't have been such an unusual sight. In the past 2.6 million years (or what's known as the Quaternary Period), the planet has undergone more than 50 ice ages, with warmer interglacial periods in between.

But what causes ice sheets and glaciers to expand periodically? Ice ages are driven by a complex, interconnected set of factors, involving Earth's position in the solar system and more local influences, like carbon dioxide levels. Scientists are still trying to understand how this system works, especially because human-caused climate change may have permanently broken the cycle. [Has the Earth Ever Been This Hot Before?]

It wasn't until a few centuries ago that scientists started recognizing hints of past deep freezes. In the mid-19th century, Swiss-American naturalist Louis Agassiz documented the marks that glaciers had left on the Earth, such as out-of-place rocks and giant piles of debris, known as moraines, that he suspected ancient glaciers had carried and pushed over long distances.

By the end of the 19th century, scientists had named four ice ages that occurred during the Pleistocene Epoch, which lasted from about 2.6 million years ago until about 11,700 years ago. It wasn't until decades later, however, that researchers realized that these cold periods came with much more regularity.

A major breakthrough in the understanding of ice age cycles came in the 1940s, when Serbian astrophysicist Milutin Milankovitch proposed what became known as the Milankovitch cycles, insights into Earth's movement that are still used to explain climate variation today.

Milankovitch outlined three main ways Earth's orbit varies with respect to the sun, Mark Maslin, a professor of paleoclimatology at University College London, told Live Science. These factors determine how much solar radiation (in other words, heat) reaches the planet.

First, there's the eccentric shape of Earth's orbit around the sun, which varies from nearly circular to elliptical on a 96,000-year cycle. "The reason why it has that bulge is because Jupiter, which is 4% of the mass of our solar system, has a strong gravitational effect, which shifts the Earth's orbit out and then back," Maslin explained.

Second, there's the tilt of Earth, which is the reason we have seasons. The tilted axis of Earth's rotation means one hemisphere is always leaning away from the sun (causing winter) while the other is leaning toward the sun (causing summer). The angle of this tilt varies on a cycle of about 41,000 years, which changes how extreme the seasons are, Maslin said. "If [the axis] is more upright, then of course the summers are going to be less warm and the winter is going to be a little less cold."

Third, there's the wobble of Earth's tilted axis, which moves as if it were a spinning top. "What happens is, the angular momentum of the Earth going round and round very fast once a day causes the axis to wobble around as well," Maslin said. That wobble occurs on a 20,000-year cycle.

Milankovitch identified that orbital conditions for cool summers were especially important precursors to ice ages. "You’re always going to have ice in winter," Maslin said. "To build an ice age, you need to have some of that ice survive through the summer."

But, to transition into an ice age, orbital phenomena alone aren't enough. The actual causation of an ice age is the fundamental feedback in the climate system, Maslin said. Scientists are still teasing apart how various environmental factors influence glaciation and deglaciation, but recent research has suggested that greenhouse gas levels in the atmosphere play an important role.

For instance, scientists at the Potsdam Institute for Climate Impact Research (PIK) in Germany have shown that the onsets of past ice ages were triggered mainly by decreases in carbon dioxide and that the dramatic increase of carbon dioxide in the atmosphere, because of human-caused emissions, has likely suppressed the onset of the next ice age for up to 100,000 years.

"Like no other force on the planet, ice ages have shaped the global environment and thereby determined the development of human civilization," Hans Joachim Schellnhuber, then-director of PIK and a co-author of one of those studies, said in a statement in 2016. "For instance, we owe our fertile soil to the last ice age that also carved out today's landscapes, leaving glaciers and rivers behind, forming fjords, moraines and lakes. However, today it is humankind with its emissions from burning fossil fuels that determines the future development of the planet."