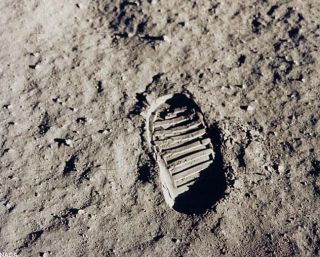 An Apollo astronaut's bootprint on the moon.
(Image: © NASA)

Our bright moon was as familiar a sight to ancient hunter-gatherers as it is to today's stargazers. But in recent decades, it's gathered a bit of invisible clutter.

Since the beginning of space travel, humans have left various things on the moon ranging from footprints to small pieces of spacecraft to human poop. Recently, the Israeli spacecraft Beresheet crashed onto the moon and might have dumped thousands of dehydrated tardigrades, DNA samples and 20 million tiny digital pages of information about humans onto its barren land.

Though the crash was unintentional, and it's unclear if any of these objects and organisms survived it, it raises the question: What are humans allowed to leave on the moon?

The short answer: Legally, anything except for weapons, said Frans von der Dunk, a professor of space law at the Nebraska College of Law at the University of Nebraska-Lincoln. But the answer is "unfortunately not as straightforward as we would like it to be."

That is because, even though space laws are in place, they aren't signed by all countries participating in space travel. What's more, the guidelines that are in place aren't legally binding — though practically, most space agencies do follow these.

"The baseline rule of space law is permissiveness," he said. "Unless anything is one way or another specifically prohibited or conditioned, it would be considered allowed." The 1967 Outer Space Treaty is probably the most potent of the space treaties out there, and is signed by most of the major space-traveling countries, he said.

This treaty focuses on the "peaceful uses of the moon," and prohibits any kind of military exercises and weapons from being placed on the moon. What's more, it prohibits any kind of "harmful interference" to the environment or to other missions to the moon. So, for example, one country can't do an experiment on the moon that is going to impact another country's mission.

Nobody really thought about living organisms when they created that major space treaty back in 1967, von der Dunk told Live Science. So in general, anyone can put anything on the moon "as long as it is for peaceful purposes." The 1979 Moon Agreement is another treaty that aims to specifically deal with the moon — but it's rather useless as none of the countries that signed it, save for maybe Australia, are considered major space-faring nations, he said.

What's more, there are no laws in place about bringing things back from the moon — for example, the lower lunar modules of the Apollo missions are still on the lunar surface. But there is some discussion about space junk, as "plenty of states are coming to a realization that if we just go on putting stuff up there and not caring, then maybe 10 to 20 years from now, space will be impossible to access safely," von der Dunk said.

Aside from actual laws, there are guidelines set in place by the Committee on Space Research, made up of a global group of scientists with a variety of expertise. These guidelines include recommendations on sanitizing spacecraft so that they don't introduce earthborn bacteria or other organisms wherever they land.

Though these guidelines aren't legally binding, and technically spacecraft covered in organisms can land on the moon, most large space agencies like NASA follow the guidelines, he said.

So if tardigrades are resting on the moon, they might be confined to a solitary life.