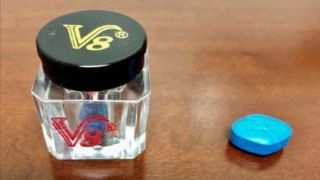 More than a dozen men in Virginia developed dangerously low blood sugar after taking a male sexual enhancement supplement laced with prescription drugs, according to a new report.

The outbreak began in August 2019, when men in Virginia started showing up to emergency rooms with symptoms of confusion, excessive sweating and shaking, along with very low blood sugar, according to the report, published Thursday (June 18) in the journal Morbidity and Mortality Weekly Report. None of the men had diabetes, but all reported taking a supplement called V8, which was sold in local convenience stores and claims to enhance male sexual performance.

In total, Virginia officials identified 17 men who were hospitalized for low blood sugar after taking V8 between August and November 2019. Some had blood sugar levels as low as 11 milligrams per deciliter (mg/dL), much lower than normal levels of 70 to 100 mg/dL. (Prolonged blood sugar below 40 mg/dL can cause hypoglycemic seizures, coma and death). The men spent between one and six days in the hospital, and some were hospitalized more than once, but no deaths were reported.

The V8 supplement bottles did not list ingredients, but an analysis revealed that they contained sildenafil, the active ingredient in Viagra, and glyburide, a diabetes medication that lowers blood sugar. Levels of sildenafil ranged from 55 to 156 mg per tablet, which are around the levels found in prescriptions of the drug, while levels of glyburide ranged from 90 to 100 mg per tablet, which is five to 10 times higher than doses used to treat diabetes, the report said.

The Food and Drug Administration (FDA) has warned in the past that sexual enhancement supplements may contain hidden drugs, such as sildenafil, which can pose serious risks given that the doses vary widely and people don't know they're taking them.

It's unclear why the V8 supplements also contained glyburide. In 2009, a similar outbreak of low blood sugar in Singapore was tied to counterfeit sildenafil that was contaminated with glyburide. The glyburide may have been added as a filler or to give the tablets a blue color so that they resembled Viagra pills, the authors speculated.

"Numerous tainted sexual enhancement products remain on the market as over-the-counter products, placing consumers at risk for unknown health complications," the authors wrote. Such tainted supplements should be quickly removed from the market when identified, they said.

In the current case, an investigation by the Virginia Department of Agriculture and Consumer Services led to the seizure of V8 supplements at 23 locations across Virginia; and an FDA investigation into the products is ongoing.