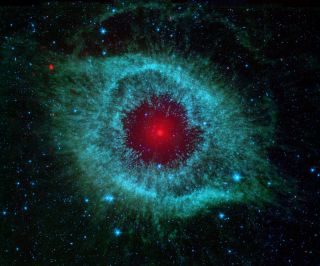 Your daily horoscope: If it's your birthday today (or any other day), congratulations! You are very lucky. You were born into a universe of endless mystery and wonder — a vast and busy place where galaxies eat each other for fun and old suns explode into majestic rainbows of gas whenever they get too tired. (May we all hope for a similar end.)

Your home planet, Earth, is surrounded by billions of twinkling stars. A long time ago, ancient Earthlings connected the dots on a bunch of those stars, forming the 12 constellations of the zodiac. Many Earthlings still look to those constellations today, hoping to find relationship advice and existential guidance hidden in the cosmos. We cannot promise they will find it. But, if you look closely enough at any sign of the zodiac, you may see something even better: a wonder of the universe.

Aries love competition, and the gas giant 30 Ari Bb — nestled about 146 light-years from Earth in the constellation Aries — is no exception. The massive exoplanet has not one, not two, but four suns in its sky. Take that, Tatooine!

How does one planet score four suns? In this case, 30 Ari Bb orbits a star in a binary system, a star system where two stars orbit around a common point. It turns out that this binary system orbits the same center of gravity as another binary system about 100 million miles away, making all four stars part of one big quadruple-star system. Astronomers have discovered only one other quadruple-star system like it in the universe, making 30 Ari Bb extremely rare… not that it's a competition or anything.

It's fortunate that Taurus and Cancer are such compatible signs, because there's a big, gassy crab nipping at the space bull's horns.

The Crab Nebula (aka Messier 1, or M1) is the remnant of a thousand-year-old supernova explosion — the violent death of star that can no longer support its own mass — located over the southern horn of Taurus. Beauty-loving bulls will be happy to know that such explosions create bright blasts of gas that can linger in the sky for tens of thousands of years or more; even now, the gas in M1 is expanding outward at about 3 million mph (4.8 million km/h).

Gemini: the great clown in the sky

Geminis are youthful, curious and fun. Add "horrific and menacing" to that list, and you've got a pretty apt description of the Clownface Nebula, a cackling gas cloud located in Gemini about 5,000 light-years from Earth.

Also known as the Eskimo Nebula, the Clownface Nebula is a planetary nebula (a bright cloud of ionized gas surrounding a dying star) made of two enormous, concentric rings. The rings are rimmed with furry filaments that stretch on for light-years, making the nebula resemble a tiny head wrapped in a parka hood — or a clown's creepy, painted visage. Laugh (or cry) if you like, but those fuzzy puffs of gas are so complex that scientists struggle to explain why they exist (much like real clowns).

Cancer: a world of diamond (or lava)

Cancers can be hard to get to know, and astronomers are having the same problem with the constellation's most famous exoplanet. Located just 40 light-years away, 55 Cancri E's is roughly twice as large as Earth and orbits its home star every 18 hours or so. That means the planet is superhot — thousands of degrees Fahrenheit on its night side alone — and probably has a pretty extreme composition. How extreme? Nobody really knows. Prior studies have hypothesized that the inscrutable planet is made completely of diamond, or else has only half an atmosphere, or maybe a surface perpetually oozing with lava. Alas, we'll just have to get closer to the planet before it opens up to us.

Stubborn like a true Leo, this runaway star in the lion constellation is literally shoving space aside as it tries to escape its neighborhood at 204,000 mph (329,000 km/h). The star, named CW Leonis and located about 310 light-years from Earth, is moving so fast, you can see it creating a bow shock (a wave of energy that pushes interstellar matter aside like the front of a boat cutting through water) in this satellite image taken in ultraviolet light. Where are you going, little star? Astronomers are too intimidated to ask, but they think CW Leonis has been charging forward for about 70,000 years now. It shows no signs of stopping.

Virgo: the biggest hat in the universe

It's not often that you see a Virgo making a scene ... or a black hole wearing a hat. Well, behold Messier 104, the Sombrero Galaxy. This quirky galaxy is a bright bulge of stars surrounded by a perfectly symmetrical ring of dust reminiscent of a sombrero's rim. This dust serves as an enormous nursery for baby stars (aww), but the real hotspot is at the sombrero's center, where a black hole with 1 billion times the mass of the sun constantly spills electromagnetic radiation into space. It's rare to see a Virgo spill anything without cleaning it up, but at least this galactic mess is 29 million light-years away.

Two Earth-like worlds circling the distant star Gliese 581 could have the right stuff to sustain life. Or, they could be illusions. Gliese 581 is a red dwarf about 20 light-years into the constellation Libra, and may have as many as six planets spinning around it. Two of those potential planets — Gliese 581d and 581g — appear to sit in the star's habitable zone, or the Goldilocks sweet spot where a planet is neither too hot nor too cold to have liquid water. Worlds like these are rare, and some astronomers believe the pair of planets may not exist at all. According to one 2014 study, Gliese 581d and 581g might just be a mirage caused by flickering sunspots on their local star's surface.

So, these two worlds are either hugely exciting or hugely disappointing. Let's settle this like a Libra and just agree they're hugely something.

Passionate and persistent, a Scorpio does not give up on a relationship. Nor do the stars of U Scorpii, a stellar partnership where one star is endlessly giving — and the other star is dead.

U Scorpii is a recurrent nova, a rare class of double-star system where a white dwarf (the shriveled husk of a dead star) continuously pulls in matter from a neighboring star, then sneezes it out again in a brilliant blaze every few decades or so. The result is a constantly brightening and dimming twinkle in the sky that's easily mistaken for the birth of a new star but is actually just the perverse dance of a stellar corpse and its captive mate. U Scorpii is an especially active romance, lighting up the sky at least seven times in the past 150 years, most recently in 2010.

Sagittarius: the monster at the center of the galaxy

Sagittarians like to keep a tight circle of friends, and there's no tighter circle than the black hole at the center of the Milky Way — also known as Sagittarius A*.

Nestled deep in the hunter constellation, our supermassive black hole is sort of like the glue that holds the galaxy together. The region around the galactic center is about 1 billion times denser with stars than our corner of the Milky Way, and all that gas and dust makes Sagittarius A* impossible to see directly from Earth. However, scientists can see the structure's throbbing energy signature as it gulps down surrounding matter at near light speed. Sometimes it eats too fast and burps up gargantuan bubbles of radiation. Sometimes it plays with its food and returns it to the kitchen, pulling stars in just close enough to transform their composition and then sending them on their way. Like many Sagittarians, the hole is fickle and uncompromising — and we'd be very sad without its company.

If you're expecting order from a constellation that's half-goat and half-mermaid, prepare to be disappointed. Consider Capricornus's most handsome galaxy group, HCG 87. The cluster of three gravitationally bound galaxies looks nice and tidy in family portraits like this one, but astronomers know that the familial harmony is only temporary. Within the next billion years, the three figures will rip each other to bits in a chaotic pileup, turning the galactic trio into one giant mess of stars. After a billion years staring at the same galaxies every day, there could be worse outcomes.

Aquarius: the Eye of God/Sauron

Aquarians are an observant lot. A crafty Aquarian could probably look at this photo of the Helix Nebula, for example, and see an enormous, terrifying eye staring into the depths of their souls. (Don't feel bad if you don't see it.)

The Helix Nebula (located 700 light-years away, in Aquarius) has been compared to the Eye of Sauron and the Eye of God. It's actually just a dead star cloaked in dust, and it takes on a fearsome pupil shape thanks to the star's infrared glow. It's spooky, though not nearly as spooky as the Skull and Crossbones Nebula lurking in the Puppis constellation. (Are you observant enough to guess what that one looks like?)

A romantic Pisces will probably try to woo you with a line about how you are made of stardust. That's very nice (nothing is sexier to an astronomy fan than dust), but for a more rewarding cosmic encounter, we suggest turning your attention to the Phantom Galaxy — aka M74 — nestled 32 million away in the constellation Pisces.

The Phantom Galaxy has been described as the perfect spiral galaxy, but really it's just the perfect view of one. From Earth, astronomers can see the galaxy's golden center and graceful spiral arms head-on, offering an unobstructed look at the galaxy's 100 billion stars. It's a gorgeous sight ... but not nearly as gorgeous as you. ;)