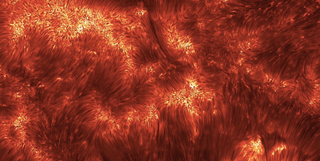 A field of gargantuan "spicules" swirl out of the sun's surface in this satellite image.
(Image: © NASA Goddard)

Don't visit the sun for the weather. Sure, you'll never have to bundle up (the sun's visible surface, or photosphere, measures a brisk 10,000 degrees Fahrenheit, or 5,537 degrees Celsius, on average) — but you might be hard-pressed to find a windbreaker sleek enough to deflect the constant electric gusts of solar wind, or wellies thick enough to withstand the gargantuan plasma tsunamis that rampage across the star's surface for weeks at a time.

You may be able to avoid these annoyances in the chromosphere — the reddish middle layer of the sun that links the star's surface to its outer atmosphere, or corona — but that neighborhood is not without its hazards, either. This vast layer is marked by a constantly moving forest of plasma spears known as spicules.

When seen through solar telescopes, spicules look like long black streaks that blast out of the sun's surface for a few minutes at a time, then disappear. Closer up, each jet is actually about as wide as the Grand Canyon is long (roughly 300 miles, or 500 kilometers) and stands anywhere from 1,860 to 6,200 miles (3,000 to 10,000 km) over the sun's surface. These giant javelins of plasma move up to 90,00 mph (145,00 km/h) as they travel from the photosphere to the corona, and usually disappear within 10 minutes. At any given time, there are a few million spicules dancing on the sun's surface, but their brief life span makes them hard to study or understand.

Now, a new paper published today (Nov. 14) in the journal Science claims to have figured out both the origin and the function of solar spicules, thanks to some high-definition observations of magnetic field interactions at the sun's surface. The study authors found that spicules almost always formed after small clumps of oppositely charged magnetic field lines popped out of the sun's surface, crashed into each other and finally disappeared. This "annihilation" of magnetic fluxes, as study co-author Dipankar Banerjee called it in an email, generates heat and energy that seem to take the form of spicules, which then transfer that energy from the sun's surface to its corona — possibly fueling other solar weather, like solar wind.

"Our new results prove that spicules are formed because of flux cancellation at the lower atmosphere, and they also provide good amount of energy for the heating of the upper atmosphere of the sun," Banerjee, an astrophysicist at the Indian Institute of Astrophysics, told Live Science.

Unlike the Earth, which has two opposing magnetic poles that form a relatively smooth shield around the planet, the sun is a tangled mess of magnetic field lines that are constantly rising, falling, twisting and snapping onto each other.

Constant convection of material within the sun regularly causes twisted islands of magnetic field lines to rise up to the surface or farther into the atmosphere; eventually, like rubber bands stretched too far, these magnetic field lines snap violently back into place, releasing gusts of plasma and energy in their wake. Scientists have long hypothesized that spicules may be a product of that energy.

Computer simulations have linked spicule formation to magnetic field activity near the sun's surface, but direct observations have been hard to come by, given that each spicule lives for just minutes. In the new study, the researchers used a special sun monitoring telescope in California called the Goode Solar Telescope at the Big Bear Solar Observatory to take some of the highest-resolution videos of spicule formation ever, simultaneously watching activity unfold in all three visible layers of the sun.

The team found that spicule formation in the chromosphere was almost always preceded by magnetic mash-ups at the sun's surface.

"One should note that these are small-scale and rapid evolutions of magnetic fields on the sun," Banerjee said. "They should not be confused with the long-term evolution of the sun's magnetic field, known as the 11-year solar cycle."

Within a few minutes of each small magnetic collision, a spicule appeared and began carrying heat and energy thousands of miles into the sun's upper atmosphere. With data from NASA's Solar Dynamics Observatory satellite, the researchers confirmed that spicules noticeably warmed the corona as they passed through, and occasionally dripped heated material back onto the sun's surface.

All these observations suggest that spicules may be a crucial cog in the gargantuan solar heating machine — in other words, "a complete mass cycling process between the chromosphere and the corona," the authors wrote in their study. This transfer of heat and energy between the surface and atmosphere of the sun could even help fuel solar wind, the researchers wrote, though they'd need to do follow-up work to confirm that. In the meantime, watch out for renegade magnetic fields on your next visit to the sun. They could be a sign that a spicule shower is on the way.