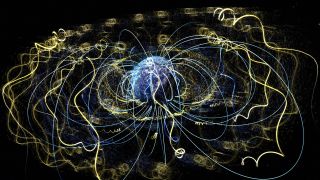 Extending from Earth like invisible spaghetti is the planet's magnetic field. Created by the churn of Earth's core, this field is important for everyday life: It shields the planet from solar particles, it provides a basis for navigation and it might have played an important role in the evolution of life on Earth.

But what would happen if Earth's magnetic field disappeared tomorrow? A larger number of charged solar particles would bombard the planet, putting power grids and satellites on the fritz and increasing human exposure to higher levels of cancer-causing ultraviolet radiation. In other words, a missing magnetic field would have consequences that would be problematic but not necessarily apocalyptic, at least in the short term.

And that's good news, because for more than a century, it's been weakening. Even now, there are especially flimsy spots, like the South Atlantic Anomaly in the Southern Hemisphere, which create technical problems for low-orbiting satellites.

Related: What Will Happen to Earth When the Sun Dies?

The first thing to understand about the magnetic field is that, even if it weakens, it's not going to disappear — at least, not for billions of years. Earth owes its magnetic field to its molten outer core, which is made mostly of iron and nickel. The churning outer core is powered by the convection of heat released as the inner core grows and solidifies, said John Tarduno, a geophysicist at the University of Rochester. (The inner core grows by about a millimeter per year.)

This magnetic-field engine, known as a dynamo, has been chugging along for billions of years. Scientists think that the current core arrangement may have settled into place about 1.5 billion years ago, according to 2015 research that found a leap in the magnetic field's strength around then. But Tarduno and his team have found evidence for a magnetic field on Earth in the planet's oldest minerals, zircons, dating back 4.2 billion years, suggesting that activity in the core has been creating magnetism for a very long time.

It isn't clear why the dynamo got started, Tarduno told Live Science, though it's possible that the enormous planetary impact that created the moon might have been the key driver. This impact, which occurred perhaps 100 million years after Earth came together, could have shaken up any stratification, or layering, of materials in Earth's core: Imagine shaking up a bottle of oil and water on a planetary scale. This disruption could have promoted the convection that still drives Earth's dynamo today.

Eventually, the inner core will probably grow large enough that convection in the outer core is no longer efficient, and the magnetic field will fail. But that scenario is so far off that it's not worth losing much sleep over.

Far more relevant to the lives of humans is that the magnetic field is weakening. Scientists have been measuring this weakening directly with magnetic observatories and satellites for the past 160 years. Whether the field was faltering before that is a bit murkier, as is what it will do next. The magnetic field is currently about 80% dipolar, Tarduno said. That means it acts mostly like a bar magnet. If you could put iron filings around the planet (and remove the influence of the sun, which spews a constant stream of charged particles called the solar wind toward Earth, blowing the magnetic field around like long hair in a breeze), the resulting magnetic field lines would show a clear North and South. But 20% of the field is non-dipolar, meaning it's more complicated; there are local variations.

Related: 5 Ways the World Will Change Radically This Century

In the past, the magnetic field has flipped, swapping North and South. The last of these reversals happened 780,000 years ago, around the era of Homo erectus. Weakening of the field has typically preceded these flips, raising questions about whether another flip-flop is imminent. But the field also weakens at times and then strengthens again without flipping, a phenomenon called an excursion.

Tarduno and his team have found that a weird eddy in the core under South Africa might be contributing to some of this weakness. This eddy appears to cause the South Atlantic Anomaly, a known weak spot in the field that stretches from about 190 miles (300 kilometers) east of Brazil across much of South America. In this area, charged particles from the solar wind dip down closer than usual to Earth. The South Atlantic Anomaly isn't particularly noticeable on the ground. But Earth-orbiting satellites encounter more damaging solar particles there, and astronauts who have traveled through the region on the International Space Station have reported shooting-star visual phenomena thought to be caused by relatively high levels of radiation at the level of low Earth orbit there.

Tarduno and his team suspect that the variation in the mantle under South Africa might have been the trigger point for magnetic field reversals in the past. The good news is that, even if the field is weakening, or preparing to flip, it's not going to disappear; there's no evidence that the magnetic field has ever gone away completely during a reversal.

Even if the field reverses, "we'll still have some magnetic field present; it just is going to be a very weak magnetic field," Tarduno said.

What would this world with a minimal magnetic field look like? Well, your compass wouldn't work, for one thing. "It's just going to be pointing toward the [region of] the highest magnetic field," Tarduno said. "It could be very close to you; it could be very far away."

The northern and southern lights would be visible from lower latitudes, because these colorful shows are the result of the interaction between charged particles hurled from the sun in the solar wind and Earth's magnetosphere. Currently, these auroras appear near the poles, following Earth's largely North-South magnetic field lines, but a weaker field would allow the particles to penetrate Earth's atmosphere, lighting up the sky closer to the equator.

The conditions in the South Atlantic Anomaly for satellites might become common across the globe, which would cause technical glitches. Solar particles can ping electronics, disrupting bits of memory in what are called single-event upsets, or SEUs. When solar particles interact with the charged layer of Earth's atmosphere called the ionosphere, they also knock electrons free from their molecular orbits. These free electrons then interfere with the transmission of the high-frequency radio waves used for communication.

Interactions between the solar wind and Earth's atmosphere can also break down the ozone layer over time, Tarduno said, which would raise humanity's collective ultraviolet radiation exposure and increase skin cancer risks.

"Whilst it probably wouldn't be utterly catastrophic for life, there would be a much higher radiation dosage on the ground without a magnetic field," said Martin Archer, a space plasma physicist at Queen Mary University of London.

There is little evidence that past magnetic field variations have impacted life on Earth. Still, the magnetic field has undoubtedly shaped Earth's surface, helping to keep the planet's fragile atmosphere from being blown into space by the relentless force of the solar wind, Archer told Live Science.

A magnetic field is not crucial for having an atmosphere — Venus has no magnetic field and has a massive, if unwelcoming, atmosphere — but it certainly acts as an additional protective layer. Mars, which used to have a magnetic field but lost it some 4 billion years ago, has had its atmosphere almost entirely stripped away. And if there were a way to give the moon an Earth-like atmosphere, the solar wind would whittle it to nothing in a mere century, Archer said.